With retailers facing unprecedented challenges as a result of the coronavirus crisis, productivity has never been more paramount and has taken on a whole new meaning as many retailers battle against fresh obstacles including new customer demands and macroeconomic pressures.

RWRC’s new report, published in association with Catapult and Rotageek, reveals the UK’s top 30 most productive retailers of 2020 and looks at the practical steps businesses can take to follow their lead.

With retail sales down 88% on what retailers expected in early April, improving to a drop of 32% in late May, according to data from accounting firm Sage, and trading expected to be tough for the foreseeable future, the retail industry needs to jumpstart productivity to halt the erosion of profits.

The report highlights the scale of the UK productivity problem, how retailers are rethinking their approach and exploring new solutions to increase employee engagement, and identifies ways retailers can drive efficiencies wherever possible.

The top 10 most productive retailers 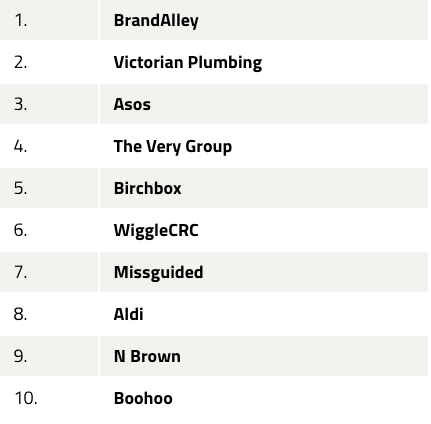 UK productivity levels were already struggling at the start of the year and the pandemic has dragged them down further.

Findings from online data platform Trading Economics, published in May, found that UK labour productivity – as measured by output per hour – fell by 1.1% quarter on quarter in the first three months of 2020, following a 0.3% rise in the previous period.

Trading Economics said this was “the biggest plunge in productivity since 1974” and largely “due to the coronavirus pandemic and restrictive measures imposed”.

Retailers have now been forced to re-examine their operations and pivot their business models to adapt to the new reality.

With less staff and high levels of UK unemployment on the horizon, employee engagement will be crucial in driving productivity. While few retailers can throw cash at staff engagement at the moment, now is the time to think about aligning employee needs more closely with business productivity.

BrandAlley takes the productivity top spot following a series of recent business wins. The flash sales site reported a sales rise of 121.9% to £45.8m in the year ending December 2018 and a group pre-tax profit of £1.4m.

This is especially notable given that the brand only became profitable in 2017, following the 2013 management buyout led by chief executive Rob Feldmann. 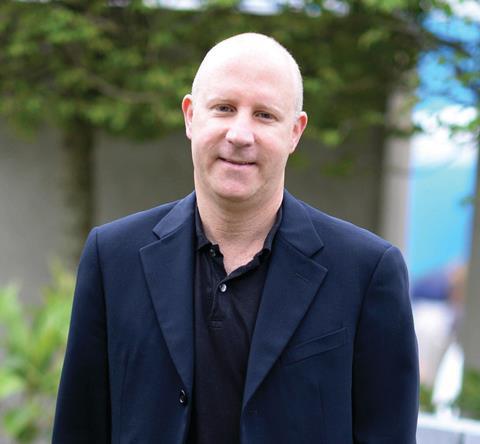 Significantly, the retailer has placed a renewed emphasis on employee engagement through wellness and mental health initiatives.

Speaking to Retail Week in October, Feldmann explained how, after encountering two members of staff suffering from anxiety, he introduced quarterly training surrounding mental health – including relaxation and breathing techniques.

Feldmann explained that such an approach emphasises “loyalty and makes [employees] feel very valued – they could see we did it because we were concerned about them”.

Three learnings from the most productive retailers

There is an interesting dynamic between traditional, established brands and emerging retailers in the ranking.

Younger brands, established after the internet boom, were often set up with current consumer expectations of technology and omnichannel retail in mind and are more productive as a result.

While there are 13 London-based retailers in the top 30, only three made the top 10, which includes five brands located in the Northern Powerhouse cities of Manchester and Liverpool.

In contrast, the remaining 20 retailers in the top 30 are largely located in the South, with just three headquartered in the North.

With the cost of living lower outside London and overheads such as rent and transport likely to be cheaper for retailers, establishing a northern base could support employee engagement while boosting the bottom line.

As remote working has become the norm during UK lockdown, with most retail offices closed until recently, retailers could make productivity gains by scaling down head offices or replacing them with regional hubs as more staff choose to work from home on a permanent basis. 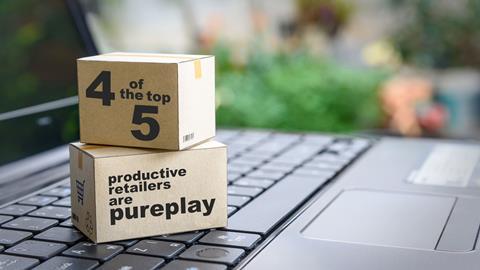 Online-only retailers have a head start when it comes to productivity, with pureplays usually having fewer employees and an arguably bigger consumer reach than bricks-and-mortar brands.

Coupled with the fact they have lower overheads, it is no surprise that pureplays are top of the class as far as productivity is concerned.

Our analysis backed this up with four of the top five being pureplay brands.

Significantly, these brands haven’t had to navigate the same challenges during the pandemic as their bricks-and-mortar counterparts that were forced to close stores for a considerable period.

Download your free copy of the report to discover the full list of the UK’s most productive retailers and discover how they’ve achieved productivity amid turbulent economic conditions.

Why not book in one of our experts to present the findings to your team, examining what they mean for you and your business.