Tesco is considering selling its Giraffe restaurant chain as the grocer increases its focus on its core UK supermarket business.

According to reports, Tesco has sounded out private equity firms and other potential bidders about their interest in buying the business, which has 60 sites across the country. 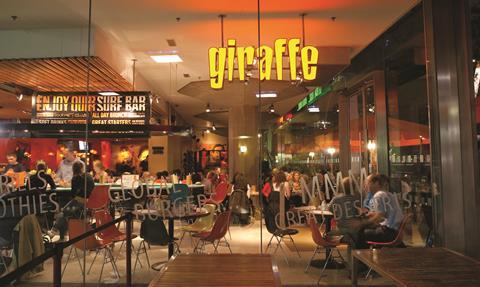 It comes just days after Tesco informed staff that it was wielding the axe on its Nutricentre health and wellbeing arm – a move that resulted in 12 standalone store closures and placed more than 130 jobs under consultation.

Giraffe is one of Tesco’s other non-core businesses that is thought to have faced greater scrutiny since boss Dave Lewis took the helm in September 2014.

The supermarket giant also owns the Harris + Hoole coffee chain, which it took full control of earlier this year, and Dobbies garden centres.

The businesses were acquired under the reign of former boss Philip Clarke as part of his drive to make supermarkets into destinations and make better use of excess space in Tesco’s larger sheds.

Tesco paid just £50m for Giraffe, so any sale would not generate a significant fee in the context of the grocer’s battered balance sheet.

Giraffe posted a loss of more than £4m in the 53 weeks to February 28 and, according to Sky News, Lewis is keen to dispose of further non-core businesses that either dilute margins or act as a distraction from his number-one focus of regaining competitiveness in its supermarket function.

That mission is seemingly gaining momentum after UK like-for-like sales grew 1.3% during the six weeks to January 9.

Tesco, which declined to comment, reports its full-year figures on April 13.