Italian etailer Yoox and Net-a-Porter are to merge, creating an online luxury fashion giant with combined profits of €108m (£78.7m). 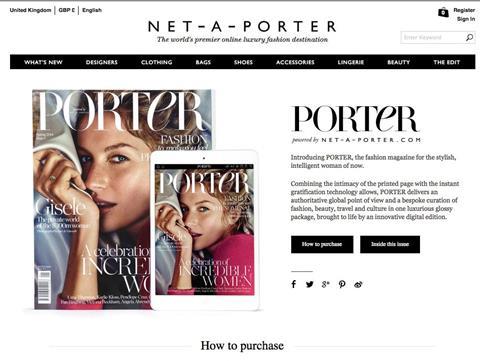 Yoox has confirmed it has entered into an agreement with Net-a-Porter’s parent company Richemont to combine the two etailers.

On completion, the transaction will create the Yoox Net-a-Porter Group which will remain on the Milan stock exchange. The deal is expected to close in September and it will create a business with a combined adjusted EBITDA of around €108m, as well as revenues of €1.3bn.

Yoox paid €718m for Net-a-Porter, according to Bloomberg.

Massenet said: “Today, we open the doors to the world’s biggest luxury fashion store. It is a store that never closes, a store without geographical borders, a store that connects with, inspires, serves and offers millions of style-conscious global consumers access to the finest designer labels in fashion.

“A store that provides established and emerging brands with the greatest interactive shop window to the world. Together, with our world-class teams in technology, logistics, content and commerce we are redefining the fashion media and retail landscape. The best way to predict the future of fashion is to create it.”

Meanwhile, Marchetti said the merger was a “game-changer”.

“Together, we plan to expand on our many combined successes and industry breadth to strengthen partnerships with the world’s leading luxury brands and harness a significant untapped growth potential,” he said.

When Yoox absorbs Net-a-Porter, Richemont will receive 50% of the combined group’s share capital, while its voting rights will be limited to 25% and it will have two out of a minimum of 12 board representatives. Following completion, the new group intends to launch a capital increase of up to €200m to fund future growth opportunities and the integration

Johann Rupert, chairman of Richemont, said: “Richemont has been a pioneer in luxury ecommerce, first as a minority shareholder of Net-a-Porter in its infancy and then as a controlling shareholder since 2010.

“We are proud of Net-a-Porter’s achievements under the leadership of Natalie Massenet, ably assisted by a wonderful team of professionals. Established business models are being increasingly disrupted by the technological giants. It is with this in mind that we believe it is important to increase leadership and size to protect the uniqueness of the luxury industry.

“The merger of the two leaders will further enhance an independent, neutral platform for a sophisticated clientele looking for luxury brands.”