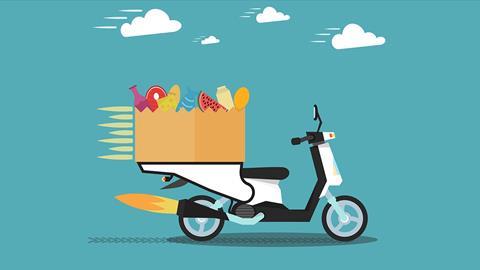 Supply chain: The need for faster fulfilment in grocery

The fight for the fastest delivery has never been more ferocious as the major UK grocers battle for consumer spend.

Tesco recently announced it was extending same-day online delivery across the UK, making it the first grocery retailer in the country to offer the service nationwide.

Having launched in London and the Southeast in 2014, it now covers 99% of UK households – from the Shetland Islands to Cornwall.

The UK’s largest retailer also launched Tesco Now, a one-hour grocery delivery for up to 20 items for selected central London postcodes, in June.

Shoppers are increasingly demanding speed and convenience within grocery – with Amazon, in particular, playing a large part in changing customer expectations of what is possible – and the supermarkets are responding by flexing their muscles with a range of additional services.

Molly Johnson-Jones, senior analyst at business intelligence group GlobalData Retail, says one-upmanship is inherent across the grocery sector as a whole, and rapid fulfilment is just one area where this is experienced.

“It’s such high competition now owing to the discounters coming in, and the incumbent market players are all vying for an increasingly small share of the market,” she says.

“In order to differentiate they need to be seen by the public to be offering something that the discounters cannot. People realise that online is where market share is going to come from in the future.”

Delivered in time for dinner

Tesco’s extension of its service comes as the retailer reports it is experiencing an 18% increase in demand for same-day delivery. The UK’s largest retailer allows customers to order by 1pm and receive their goods by 7pm onwards for a fee of between £3 and £8.

Speed and convenience are clearly major battlegrounds for UK supermarkets. With Amazon recently bringing its sophisticated fulfilment model to the UK grocery market through Fresh and Prime Now and the continued rise of on-demand food services such as Deliveroo, there is now additional competition in the mix of traditional rivalries.

That is not to say those are a thing of the past. Evidence of one-upmanship in action came just a matter of weeks after Tesco announced its same-day delivery expansion with Sainsbury’s revealing a number of London customers could access a 30-minute click-and-collect grocery service.

Although only in the trial phase, shoppers can collect up to 25 items from the flagship Sainsbury’s store in London’s Pimlico just half an hour after ordering online.

It is an extension of the Chop Chop mobile app, which launched in 2016, promising delivery by bicycle to selected London postcodes in under an hour.

A Sainsbury’s spokesperson says: “Chop Chop’s continued success in our Wandsworth and Pimlico stores highlights that shoppers are increasingly looking for faster and more convenient ways to shop.”

The cost of convenience

What constitutes success in online retailing is increasingly difficult to monitor.

Offering customers a wide choice of fulfilment options – rapid delivery, various click-and-collect services or fulfilment to lockers located in shopping centres, train stations or other transport hubs – is a key requirement to successful retailing, but so too is making a profit.

And the two do not often go hand in hand, as a recent survey of retail and consumer goods company chief executives indicates.

The number of respondents planning to charge for online orders rose from 29% last year to 57% in 2017. Some 62% also expect to increase the minimum order thresholds for free standard home delivery.

Johnson-Jones remarks: “Any basket that’s below £60 and home delivered is loss making.

“If you consider you’re paying someone at national living wage to pick groceries, you’ve got rid of your margin before factoring in delivery costs, fuel and the cost of having vans on the road.

At £60, Waitrose has the largest minimum spend for customers to qualify for free delivery – and it makes that very clear on its homepage to avoid hidden surprises at the online checkout. 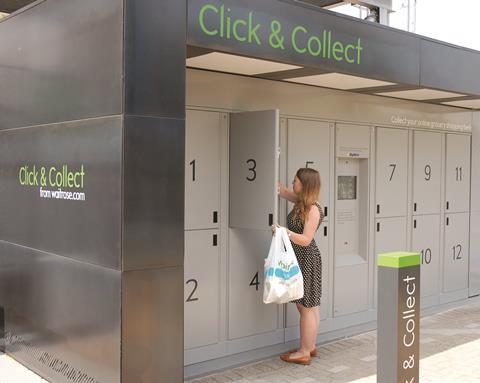 Tesco and Sainsbury’s charge for their premium speedy deliveries, but analysts view the Now and Chop Chop rapid delivery services as strong marketing tools but not necessarily essential business drivers.

The largest retailers in the world are facing the customer satisfaction/profitability pressure challenge head on, and it is resulting in the creation of some new market propositions.

Earlier this year, Walmart started charging online customers less for an array of every day products if they chose to pick up those items in a store instead of receiving home delivery. The aim is to decrease the number of costly vans on the road.

It remains to be seen whether any of these innovative initiatives filter across to Walmart-owned Asda in the UK, but Asda itself has its share of unique delivery options.

Various surveys suggest the cost of online retail and giving shoppers what they want in terms of smaller delivery windows is chipping away at supermarkets’ margins, but Robbie Feather – when online director of Sainsbury’s in 2015 – told an IGD event audience he believed the company was the most profitable UK grocer in ecommerce.

Ocado claims to be profitable on every order, but says it reinvests much of that profit into technology development.

Matt Soane, general manager at Ocado Technology, argues: “You need to be very smart in terms of how you approach this increasing demand [for faster delivery] – if you’re not careful in the background you could be jeopardising your profits.

“The Ocado Smart Platform (OSP) has a feature to support immediacy – the robot hive in the warehouse can assemble 50 to 60 items – your typical weekly shop – in five to 10 minutes. Assembling this in such a short time enables us to then look at how we can support immediacy.”

Growing demand for online orders has resulted in warehousing becoming an increasingly valuable asset, and investments from the likes of Amazon, Tesco, Sainsbury’s and Ocado have helped British property developer Segro strengthen its business in recent years.

Reporting a strong first half of the year, Segro – which also works directly with third-party logistics providers such as DHL Supply Chain and DPD to open sites to be used by retailers – attributed much of its success to the growing online retail market.

But the changing fulfilment propositions of the grocers and the wider retail industry means supply chains must evolve too, it says.

“Retailers need to upgrade their networks and platforms because of the need of modern business, which includes growing automation and rapid fulfilment”

“Retailers need to upgrade their networks and platforms because of the need of modern business, which includes growing automation and rapid fulfilment,” says Alan Holland, greater London business unit director at Segro.

“There’s an upgrade challenge on the one hand, but the second challenge is proximity. The networks need to be as close as possible to where people live or work because we’re seeing that consumer patterns and expectations have changed.”

Demand for next-day delivery and more specific time-slots are part of a changing consumer mindset that is driving retailers to upgrade networks and consider city-edge locations where possible, such as Segro’s Greenford Park near the M4 and A40.

Although the major grocers have a nationwide remit, their rapid delivery options tend to be centred in urban areas – primarily in London – where speed and convenience appear particularly important.

As the supermarket chains speed up home delivery or expand click-and-collect options, there will be a need to source goods quicker.

Holland argues these trends and the inevitable environmental impact in urban areas could lead to more warehouse sharing and efforts to operate with fewer delivery vans.

“One big change the retail industry will have to grasp is the need for consolidation or multi-user facilities – at the moment, most retailers’ supply chains operate independently,” he says.

“If you look at the air quality issues in London there is a need for this – and we’re working with a few authorities to look at what can be done. There is a need to have consolidation centres where multiple vans can come in and one van can go out full.”

ground drone web This six-wheeled ground drone – which travels at 4mph, has a two-hour battery life and will make deliveries within a three-mile radius within 30 minutes, carrying about two bags worth of goods – was developed by Starship Technologies and has been trialled for use by Tesco

Online accounts for a 7% share of the overall UK grocery industry, but is expected to reach 9.5% in 2022.

As the grocery market moves towards faster online delivery and more ecommerce orders, Holland suggests there will be a need for superfast broadband and better connectivity in warehouses to deal with additional demand on the tech infrastructure.

Increasingly sophisticated systems are already being used in the retail supply chain to help meet fast-changing consumer behaviour, but it remains to be seen what innovations will become the norm.

While there has been talk for years about Amazon testing drone technology for potential use in the delivery of online goods, ground-based robot delivery is actually happening in the wider retail space.

Starship Technologies and Domino’s Pizza are working together to deliver pizzas by automated robots, while Tesco trialled  robot-enabled food delivery in the spring,  also with Starship.

Online supermarket Ocado – which prides itself on its in-house technological development and sells its smart platform  to third parties looking to outsource their ecommerce operations, such as Morrisons – recently trialled delivery by self-driving and electrical vehicles.

James Donkin, general manager at Ocado Technology, says: “The people who succeed in the market will be those who can do it with great operational efficiency and a strong technological solution that can get the job done. It’s really about the greatest proposition with a really effective back end that can support it.”

Getting that balance right is not an easy task, and that is why the industry will continue to trial new fulfilment methods and maintain its investment in technology that has a dual purpose of offering customers more and making internal operations more efficient.

Johnson-Jones says: “I don’t think online at the moment can be seen as a profit exercise in grocery – I think it has to be seen as if you don’t participate you are just leeching market share because online is growing faster than normal food and grocery retail.

“You need to get into it now, sacrifice margin as necessary, and hope that in time the volumes go up and the number of people using online for their large shop grows, and you are able to take a slice of the profitable industry that it can become.”

This feature appears in Retail Week’s Supply Chain supplement, out this month. Read the supplement in full here.