Facebook’s head of retail and ecommerce Martin Harbech says lots of retailers are “underestimating the opportunity” of mobile in product discovery. 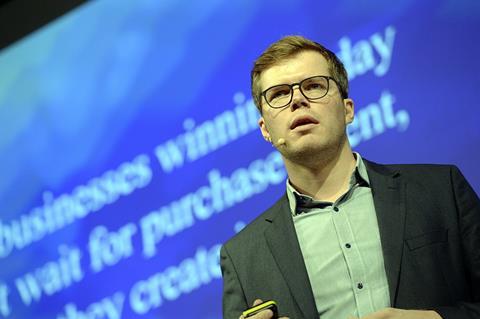 Harbech said that “the future of retail lies in mobile influence” at the Tech. powered by Retail Week conference today.

The Facebook director said that although analysts predicted that only 7% of retail sales would come directly from mobile by 2020, the device was fast becoming the most influential driving force in shoppers’ purchasing decisions – and that many retailers were failing to keep up.

“Discovery has always been a core part of shopping but now with smartphones, fast internet and people-based marketing, discovery is exploding on mobile and accelerating a behaviour that has always been core to shopping,” said Harbech.

“Lots of retailers are missing or underestimating that opportunity because they are looking at mobile as a separate channel.”

Harbech pointed to start-up retail disruptors such as Eve Sleep and Birchbox as businesses that had harnessed the power of data to appeal to the “passive consumer.”

“On their mobile phones people increasingly expect relevant products to find them – it’s much more a push environment than a pull environment,” said Harbech.

“The businesses that will win are the ones that create an incentive and make products find the right customer, not the other way round.”

Harbech said Facebook has ploughed investment into its platform over the last decade to become “the world’s number one discovery platform”.

“We invest heavily in artificial intelligence and machine learning to determine what is relevant for someone,” says Harbech.

“Our systems have to pick out what the most meaningful and relevant is based on what you’re doing because businesses have to fight really hard to be in the bracket of content that is seen – and on social media they’re not just competing with other brands and retailers, but a user’s friends and family.”

Harbech highlighted retailers such as Zalando and Mulberry as businesses that had combined visually immersive content with personalisation to create standout mobile shopping experiences and drive sales.

He also hinted that shoppers would be able to buy directly through Facebook and Instagram in the future and said he was confident that augmented and virtual reality would one day play pivotal roles in product discovery.