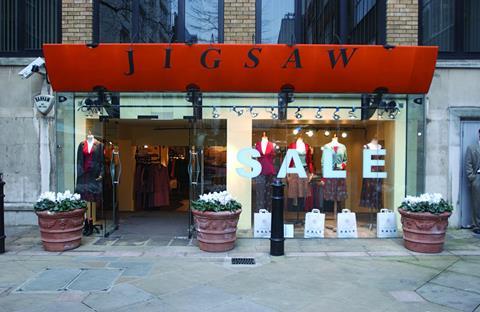 “I don’t believe in flagships anymore,” he told the audience. “The concept of a brand flagship as a one-off place and a centre of your business is no longer relevant.

“The landscape has fundamentally changed and the old world concept of flagship is dead and if you try and deliver that you will fail.”

Ruis claimed Jigsaw’s two-floor, 6000 sq ft Duke Street Emporium in North Mayfair, which has been open for six months, was “an anti-flagship” and an example of how a shop can fulfil a very different function.

A store should be set up as a meeting place for shoppers to engage with each other, shop staff and the brand, he said. Duke Street Emporium achieves this by running events such as Secret Cinema, selling art and furniture, offering coffee, and has a juke box for shoppers to select their own music.

Ruis urged the retail industry to move away from the idea of thinking of flagships as “show pieces”. It’s much more important that stores are “a hybrid, rather than a fashion monolith,” he said. “In a digital world we need more meeting places.”

A store should “not be repeatable,” he added, “I want it to be a one-off”. “I want it to be boring in the next few years. The next Jigsaw shop will look completely different and have nothing to do with Duke Street Emporium.”

Ruis spoke out against digital technology in bricks and mortar stores. An anti-flagship “should be an anti-digital space”, he said. Rather than encouraging consumers to interact with screens, Ruis believes shoppers should be encouraged to “engage in the three dimensional”.

The fashion chief concluded that a shop should be considered “a link in the consumer journey – not the beginning and end”.

Retailers’ omnichannel offers have become their “strategic flagship”, he claimed. “The flagship no longer takes the most money. Your website is your number one store in cash terms,”  he said, but pointed out that stores have a vital place in retailers’ strategies. “Don’t believe anyone who says you should be closing your shops and just opening a website.”

He closed by telling the audience “customers want a sense of experience” – and differentiated bricks and mortar shops can achieve that.