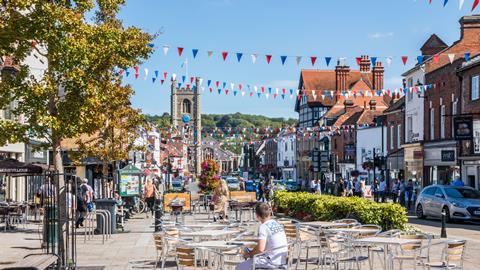 Coronavirus has wreaked havoc on the ranking of retail’s most vibrant shopping locations, with a swing away from city centres and towards smaller commuter towns in 2021.

The annual ranking, which uses a number of metrics including change in residents’ movement and vacancy rates to rank 1,000 retail locations in the UK in vitality terms, recorded a major shift away from city-centre locations compared with pre-Covid rankings.

Westfield London, which was the second most vibrant retail location in 2019’s ranking, has tumbled 203 places to 205 this year. Other central London locations Knightsbridge, Chelsea and the West End tumbled 327, 243 and 339 places respectively to 330, 247 and 348.

On average, city centres fell 142 places in the rankings, second only to out-of-town malls, which registered an average fall of 281.

HDH’s head of retail consultancy Andy Metherell said: “This Vitality Ranking looks very different from previous years as the ‘retail health’ of high streets across the country has seen contrasting fortunes since the start of the pandemic.

“The most vital retail centres currently provide services that are essential to people’s lives, such as grocers and pharmacies. These essential retailers have been able to trade throughout the strictest lockdowns, and consumers have not been willing or able to travel far to visit these stores.

“Shopping patterns have therefore changed significantly since the start of the pandemic and consumers’ local high streets are benefiting at the expense of major destinations.”

This swing towards more local shopping meant a greater spread of regions across England featured in the top 50 ranking this year, with areas in the East Midlands and Northeast featuring for the first time.

However, as in previous years, retail centres in the Southeast featured most prominently in the top 50, followed by retail locations across Greater London.

While most of the top 50 were in the upper echelons of the 2019 Vitality Ranking, these centres have often climbed 25 to 50 places as larger retail centres fall due to shoppers staying closer to home for their shopping trips.

The top-ranked location of Beaconsfield climbed 63 places to the top spot compared with its ranking in 2019, while Harpenden ranked ninth in this year’s ranking, having climbed 130 places since 2019.

HDH’s head of UK retail Dan Hildyard said: “More restricted consumer shopping habits have had an enormous impact on the relative success of high streets this year, with a shift to home working encouraging residents to reconnect with their local community. Affluence is a factor here, and some consumers are protected from job losses seen in other industries.

“While city-centre destinations have suffered from travel restrictions and the absence of office workers, the fundamental strengths of these locations remain and we expect them to bounce back over the course of this year in line with restrictions being eased and consumer confidence in the economy and personal safety rising.”