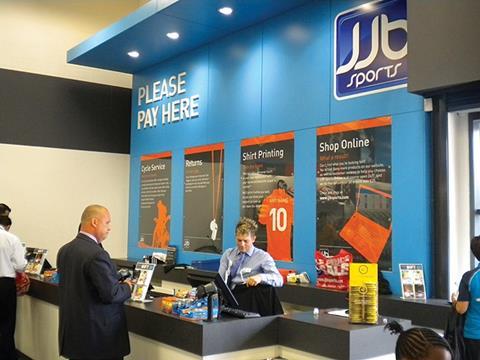 It is understood that Mike Ashley’s giant business may acquire all of JJB’s stock as well as a parcel of stores, which would eliminate the need for a closing down Sale.

However, sportswear brand Adidas is understood to have told Sports Direct that it would want to be paid in full for the value of its stock, prompting Ashley to attempt to reduce his offer, Sky News has reported.

Ashley’s bid is understood to be “in the low tens of millions of pounds”, according to insiders.

JJB is closing in on appointing KPMG as administrator – a precursor to any sale. JJB said on Monday that a deal was expected in the “next few days”. However, some observers believed it may not happen until early next week after rent-quarter day.

JJB has been in talks with prospective buyers for several weeks. Along with Sports Direct, conglomerate the Stafford Group, which runs 60-store Irish chain Lifestyle Sports, and JJB founder Dave Whelan have also been circling.

JJB has suffered falling sales for some years and conducted two CVAs, allowing it to dispose of underperforming stores, as well as capital raisings. A steep downturn in trading and poor performance during Euro 2012 left it teetering on the brink.