As Philip Clarke’s three years as Tesco chief executive come to an end, Retail Week pinpoints the seminal moments of his tenure. 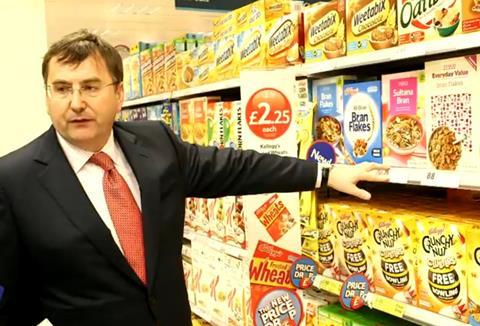 Clarke takes over as group chief executive from predecessor Sir Terry Leahy after a lifelong career at Tesco that began as a shelf-stacker at the age of 14.

Tesco pulls the plug on its struggling Japanese business.

The grocer launches a Big Price Drop cost-cutting drive in the UK ahead of Christmas. It was later labelled the Big Price Flop by the media.

A £1bn plan to turnaround Tesco’s core UK business is unveiled, with the investment earmarked for store redevelopments and a renewed focus on fresh food.

Clarke turns down his bonus after the profit warning.

Tesco discloses the first fall in group profits since 1994 after a slowdown in sales in the UK, the cost of a £1bn turnaround plan and pressure on its international businesses.

Tesco launches a strategic review of its loss-making US business Fresh & Easy and at the same time highly regarded deputy chief executive Tim Mason, who led the US business and oversaw global marketing, departs.

In the same month Chris Bush is promoted to head up the UK operation as Clarke steps back from the day-to-day management of the UK business.

Clarke kick-starts a “root and branch” review of Tesco’s supply chain after the retailer is caught up in the horsemeat scandal.

Clarke announces an end to the ‘space race’ in the UK supermarket sector with the scrapping of town centre developments.

Clarke culls 50 members of senior management across all departments as part of its UK turnaround plan.

Reports emerge Clarke has been banned from driving for six months after he was caught speeding.

Clarke unveils an overhauled Extra in Watford, where new ideas to reinvigorate the reatiwler’s giant stores are showcased.

Clarke reveals a budget priced own-brand tablet called Hudl, ahead of the busy Christmas period, which flies off the shelves as Tesco sells 35,000 tablets in the first two days after launch.

Following the success of the Hudl, Clarke says Tesco will launch its own smartphone by the end of the year.

The 54-year-old Clarke tells the BBC he wants to stay at Tesco until his retirement at the age of 60.

Clarke steps down to make way for Unilever lifer Dave Lewis. News of the leadership change comes a day before Clarke’s party to celebrate 40 years at Tesco was scheduled.