Martin Lewis, founder of MoneySavingExpert.com, warned retailers that using the “wrong” delivery company could cause brand damage and lead to firms losing customers. 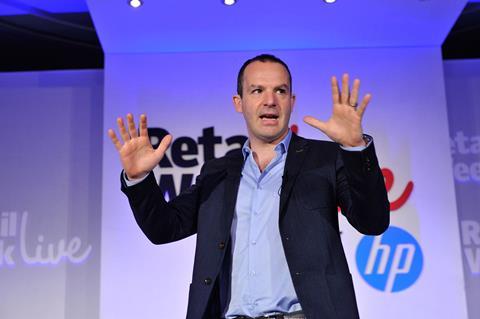 Speaking at Retail Week Live this morning, the campaigner and TV presenter told the audience that a poor delivery service was the “quickest way to destroy your brand”.

“We say ‘don’t blame the delivery company, blame the retailer’,” said Lewis. “I hope you have brand damage from it. No shit guys, I represent consumers not you. I’m not here for you.”

He added that many people would still continue to buy from powerful companies such as Amazon even if they’d experienced a poor delivery service, but that “smaller firms could lose customers if they use the wrong delivery company.”

We say ‘don’t blame the delivery company, blame the retailer. I hope you have brand damage from it. No shit guys, I represent consumers not you. I’m not here for you.

During his presentation this morning, Lewis said sustainable supply chains were not valued by the consumer. “Most consumers don’t care about supply chains,” he said. He pointed to a survey his website had undertaken that asked consumers that even if they knew they were buying cheap goods made by children in a factory in the developing world would they change their purchasing. He said the vast majority said no.Consumers are more price conscious than supply chain conscious, he added.

Martin Lewis on deliveries - one of consumers' top complaints about businesses

Lewis also said that the economic downturn had led consumers to become more savvy, knowledgable and empowered than ever before. “Things are changing in the bounceback from the economic downturn,” he said. “Consumers will have more money in their pocket… consumers have become a different beast, they’re more aggressive, more educated, more complex… they can sit on Google and get an answer. The landscape has changed radically.”

“People price compare on the internet, they’re willing to go to different shops. It’s a changing landscape and they have the ability at fingertips to make a discerning purchase,” he said.