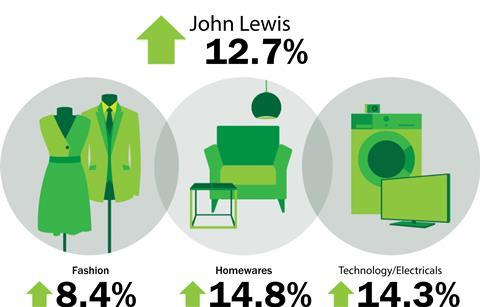 Sales in its second half were up 8%.

“By any measure that’s a pleasing outcome as it represents a decisive gain in market share,” said John Lewis managing director Andy Street.

“Our story again has been one of bricks-and-clicks success, and last week was no different,” said Street. “Johnlewis.com continued to lead as if to underline what a powerhouse online has become for us.”

However, he said the multichannel retailer’s stores achieved their best full-year like-for-like growth since the onset of the recession. A total of 16 shops delivered record years.

Street said John Lewis rounded off its trading year in “fine style” as sales at the department store group rose 12.7% last week, to £66.67m. He added that the retailer was helped by weak comparables – snow fell this time last year.

Electricals and home technology were “closely behind” while accessories and childrenswear were strong performers in fashion. Over the year, electricals achieved the greatest market share gains, although all categories grew their share.

“We go into the new trading year with a precious commodity: momentum. Moreover, we have lots of plans to stand out from the crowd in 2014,” Street added.