Grocery market growth fell to 0.9% in the 12 weeks ending July 20, the lowest level for 10 years, as the price war takes hold of the sector. 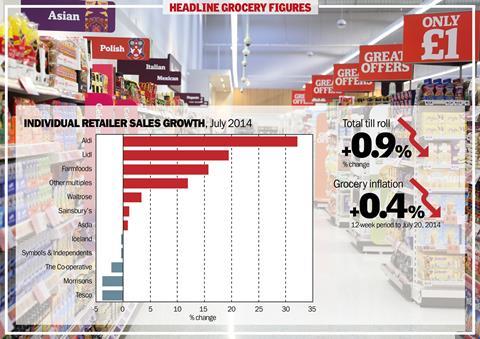 Inflation fell to 0.4%, the lowest level since October 2006 due to the competitive pricing in staples such as vegetables, milk and bread, according to the latest figures from Kantar Worldpanel. This is the tenth successive period that grocery inflation has fallen.

Kantar Worldpanel director Edward Garner said: “Aldi’s 32% growth rate has lifted its market share to 4.8%; this is a new record for the retailer and means it has nearly caught up with Waitrose on 4.9%.”