Poundworld will file its intention to appoint administrators today after a rescue bid from Alteri collapsed, putting 5,500 jobs at risk.

The embattled value chain, which has been owned by private equity firm TPG Capital since 2015, will file the notice today in a move that could lead to the closure of its 355-strong store estate. 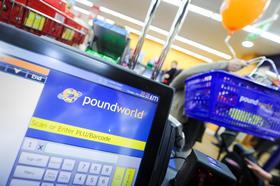 The move comes days after restructuring specialist Alteri Investors pulled out of a rescue deal for the retailer at the eleventh hour.

Retail Week understands Poundworld still hopes to sell the business, which has been looking for a buyer for the past month, with Deloitte leading the search.

However, a pre-pack administration remains a possibility.

A source close to the situation said Poundworld founder Chris Edwards is in discussions to rescue part of the business.

TPG Capital was initially seeking a sale of the business and planned to launch a CVA, which would have axed around 100 Poundworld shops and 1,500 staff.

The private equity firm, which injected £20m into the Poundworld at the beginning of the year in an effort to reverse its flagging fortunes, is understood to have wanted the prospective buyer to fund its CVA process.

Poundworld’s filing comes as department store chain House of Fraser revealed plans for a CVA that will lead to the closure of around half of its 59-strong store estate.