Boux Avenue was the star performer of entrepreneur Theo Paphitis’ retail group over Christmas but all his businesses recorded like-for-like increases. 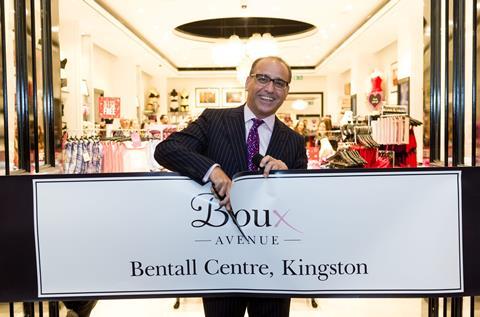 The lingerie retailer, which has recorded its fourth Christmas of trading since launching, posted a 31.7% rise in like-for-like UK sales for the six weeks ending December 24.

The sales growth from Robert Dyas came after it launched its first ever Christmas brand campaign on television, while Boux Avenue was also supported by a Christmas TV push.

He said: “Several records, both online and in-store were broken leading into Christmas as well as on Black Friday. This performance has vindicated our investment and belief in the brand which has become the first choice for many lingerie consumers across the UK.”

Paphitis’ retail group reported its full-year results at the same time as its Christmas trading update. They reveal Boux Avenue, launched in April 2011, has narrowed its operating loss after sales surged.

Paphitis is making a £5m investment in increasing Robert Dyas’ warehousing and distribution capacity. The retailer will open a 160,000 sq ft facility in Hemel Hempstead this year that it believes will allow it to double sales to £250m.

After previously operating under the ‘Ryman Group’ name, the companies will now all operate under the umbrella Theo Paphitis Retail Group.