John Lewis’ How We Shop, Live & Look report shows the retailer’s best-selling products and which retail trends customers are embracing. 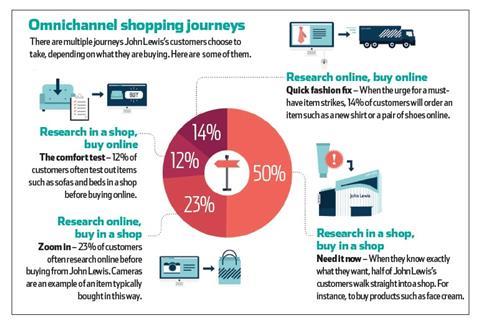 The heatwave, Gogglebox and Jeremy Paxman’s beard helped drive John Lewis’s sales in 2013/14, according to its How We Shop, Live & Look report. But Black Friday will provide the retailer with its biggest boost in the year ahead.

The discounting event that kicks off Christmas spending in the US –timed for the day after Thanksgiving – was embraced by UK retailers such as Asda, Dixons and John Lewis last year.

Scroll right on our timeline below, to see an at-a-glance breakdown of John Lewis’ best-selling products and which retail trends customers embraced.

However, this year John Lewis managing director Andy Street believes it will come of age.

“It will be significantly bigger than last year. It’s here to stay,” he said.

Over the past year, John Lewis data found that shopping on the go became the norm and for the first time more traffic to its website came from mobile than desktop.

Shoppers also started to embrace the idea of the ‘connected home’. John Lewis said that the average person now has three wi-fi enabled devices in their home and devices such as the Nest Learning Thermostat had been popular, with sales soaring 30%.

Street said John Lewis will stock more connected products next year and aims to be a leader in the field.

“John Lewis has distinguished itself as being on the cutting edge of new technology,” he said.

Meanwhile, customers fell out of love with products such as DVD players, deep fat fryers and the onesie over the past year.