John Lewis ended its summer Sale with 18.8% growth year on year last week, driven by a stellar performance in its home department. 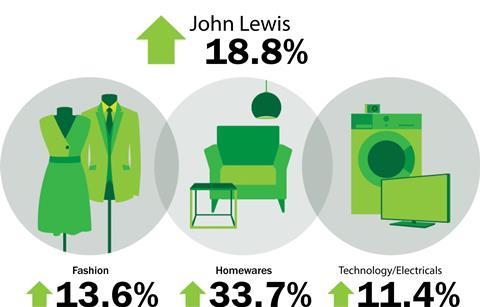 Online sales grew 25.1% while its stores business also advanced 16% over the week with High Wycombe and Cribbs Causeway star performers.

Street said: “The result lifted the score for the half year to 9.4%, and therefore with just one week to go, we can conclude that it has been another positive half for John Lewis. We go into the all important second half with hard won momentum.

Meanwhile, at sister company Waitrose, sales – excluding petrol – edged up 1.8% to £121.9m over the week to July 19. The grocer said it was up against tough comparatives as it had a high level of promotional activity and a heat wave to compete against, which drove double-digit growth in the same week last year.

Waitrose marketing director Rupert Thomas said: “This week may have felt muggy but last year it was in fact warmer and drier. As a result we’ve seen sales trends we’re more used to in the colder months

“Yorkshire puddings for instance, normally reserved for hearty Sunday roasts, are up by 100%, while roasting beef, on promotion, was up 420% compared to last year and vegetables are up 7%.”

Packet and fresh soups surged 55% and 20% respectively and teas and coffees also enjoyed a surprise summer surge as demand for hot beverages rose 35%.

Nevertheless, customers have been taken to the garden in the hot weather with sales jumping 26% in the department and outdoor plants were up 56%.

The changeable UK weather also led to a sales spike in umbrellas, which rocketed 400% over the week as showers hit.

Waitrose said the end of the school term helped boost its alcohol sales. With new research showing that 70% of teachers commonly receive alcohol as an end-of-year gift from their pupils, wines enjoyed a 6.7% rise in sales last week while champagne and sparkling wines were up by 26% and 14% respectively.