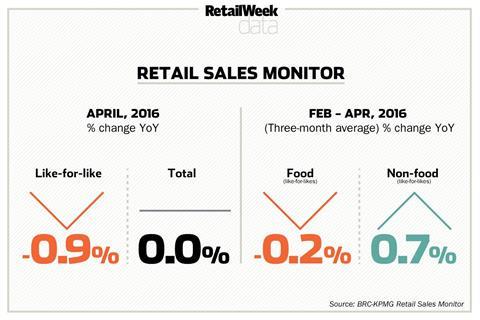 Total industry sales were flat year on year in the four weeks to April 2, according to the BRC-KPMG Retail Sales Monitor, while sales edged up 0.3% on a three-month basis, below the 12-month average of 1.5%.

Food sales were up last month for the first time this year thanks to late Easter sales but were down 0.2% on a three-month basis. On a 12-month average, food sales edged up 0.1%.

IGD chief executive Joanne Denney-Finch said: “The varying date of Easter makes comparison difficult at this time of year, but a clearer picture emerges when March and April grocery sales are combined.”

Non-food sales growth slowed in April, when sales rose 2.5% year on year. On a three-month basis, non-food sales increased 0.7%, marking the lowest performance in the sector since December 2012.

Non-food sales were driven by home accessories and furniture sales but offset by a steep decline in fashion sales, which recorded their biggest fall since September 2014 for the second consecutive month.

Footwear was the worst-performing sales category overall, while stationery, household appliances and health and beauty all reported like-for-like and total sales growth.

KPMG head of retail David McCorquodale said: “Overall, retail sales slowed during April with temperatures well below the average for the time of year.

“Looking at the three months to April, non-food like-for-like growth was particularly weak, especially for fashion and footwear, as the cooler weather dampened the launch of spring and summer ranges.”

“Overall, flat total sales mask a very mixed picture; some retailers benefiting from the healthy housing market, while others are evidently more susceptible to the effects of lower consumer confidence and a higher proportion of disposable income going into leisure and entertainment.”