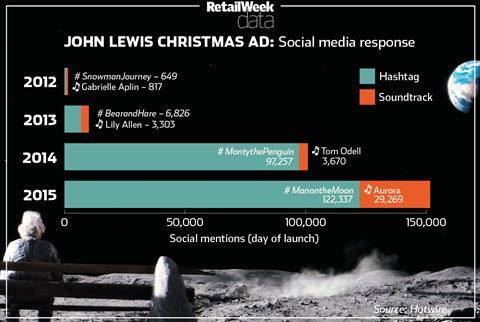 There have been about 6.3 million views of the ad, featuring the ‘Man on the Moon’, since Friday City AM reported.

According to Hotwire, an hour after launch, #ManontheMoon received 16,396 mentions on social media, while Aurora – who provided the soundtrack – received 4,449 mentions.

The number of views means that John Lewis’ seasonal ad is already ahead of last year’s ‘Monty the Penguin’ campaign, which clocked up 4.1 million views in its first day.

The Man on the Moon ad highlights the loneliness suffered by some old people at Christmas as well as promoting the department store group.

It is the latest in a series of cinema-style ads by John Lewis, whose seasonal campaigns have become a feature of the build-up to Christmas.

M&S opted for a ‘mobile-first’ campaign, which marketing boss Patrick Bousquet-Chavanne likened to a video box-set rather than a movie-style blockbuster.