Carpetright has revealed it is testing a new logo as it aims to appeal to more customers without alienating its existing shoppers. 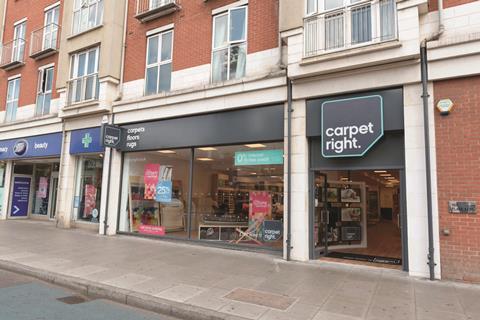 The logo has been designed to be “much cleaner and more contemporary” and will be tested in four stores this summer.

Trials are taking place in Clapham, Reigate, Thurrock and Tunbridge Wells, which have been picked because the stores there are a mix of the retailer’s high street and retail park formats.

Carpetright chief executive Wilf Walsh said: “A lot of people recognised the brand but said they would not shop with us because they did not think it was for them.

“We are changing the look and the feel to help us where we have under indexed.”

Walsh said the retailer has traditionally under indexed against John Lewis and independent carpet shops and believes the new logo will attract “higher spending customers”.

Carpetright is keen to ensure the new logo will not alienate its core shoppers because “the concept of our value heritage is absolutely sacrosanct”.

The new look is also being tested in store and soft-launched in its Clapham High Street store on Saturday and will be rolled out in the other trial stores in the next fortnight.

Walsh said there has been a revamp of fixtures and fittings and added that if “70% works and 30% gets binned then we have probably done okay”.

The overhaul of the logo came in response to customer feedback that found the store look and feel had become outdated in some locations.

Carpetright is also attempting to make elements of its product range more premium. It has launched a range of rugs with “improved price points and more creative design” and is stocking more premium branded carpets.