Asda has withdrawn a ‘mental patient’ fancy dress costume from sale after the product was deemed distasteful by the public. 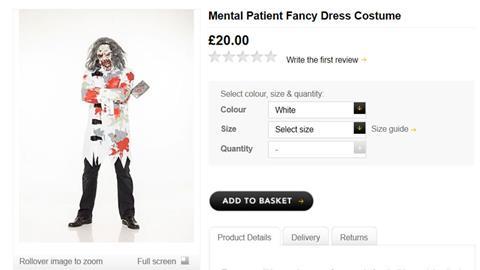 The costume is designed to look like a straitjacket covered in blood and went on sale through clothing arm George at Asda for £20, Sky News reported.

Asda quickly withdrew the product and pledged to make a “sizeable” donation to the Mind charity for mental illness.

Twitter users attacked Asda over the sale of the product. Former England footballer Stan Collymore, who has had problems with depression, wrote: “Do you actually realise how many people are hanging themselves because of being frightened of the stigma? Wording is CLEAR. MENTAL PATIENT.”

Asda said: “We’re deeply sorry one of our fancy dress costumes has upset people. This was an unacceptable error - the product was withdrawn immediately.

“We’d like to offer our sincere apologies for the offence it’s caused and will be making a sizeable donation to @MindCharity.”

Following the Asda incident, complaints were made to rival Tesco over a costume called ‘Psycho Ward’ which featured a model in an orange jumpsuit with the word ‘committed’ on it.

Tesco has removed the outfit from sale and apologised.