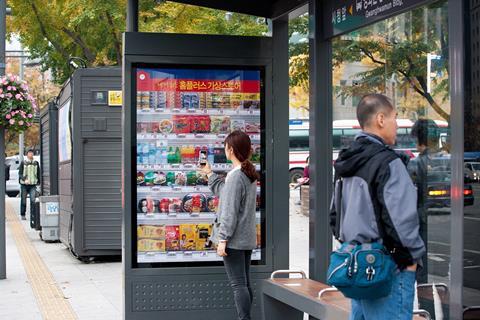 Tesco is to expand its virtual shopping walls in South Korea to target university students.

The grocer is extending the virtual stores to more than 20 bus stops near universities across the Asian country after data research.

The technique uses large adverts to drive shoppers to its Homeplus app to order products and home delivery by scanning barcodes and QR codes with their phones.

It is now the number one shopping app in Korea, with over 900,000 downloads since it launched in April last year. Homeplus says that the majority of orders placed on the app are at 10am and 4pm, while people are on their way to and from work.

A spokeswoman for Tesco said the technique “has the potential” to be incorporated in its UK business if the 24-store trial continues to perform well.

Tesco Homeplus chief executive SH Lee said: “The growing trend in smartphones in South Korea means that virtual grocery shopping is even more accessible and convenient than ever before.

“The first virtual store in the Seoul Subway was a great success with customers and has paved the way for the opening of these new stores at bus stops. We’ve found it most popular amongst 20 to 30 year olds, so the new stores will be opening close to a local university and other pedestrian areas.”

The Tesco Homeplus’ virtual store has been nominated by the London Design Museum for Design of the Year, as one of 2011’s best digital designs.

A mock up of the virtual store will be on display at the Design Museum alongside other designs including the Duchess of Cambridge’s wedding dress and the Olympic Torch for 2012.

Last year Tesco gave an insight into the technique and unveiled its mission to become the number one grocer in South Korea without building large numbers of stores: