Tesco will trial image recognition technology in-store that can instantly identify incorrectly stocked shelves as the retailer seeks to free up the time of its store staff. 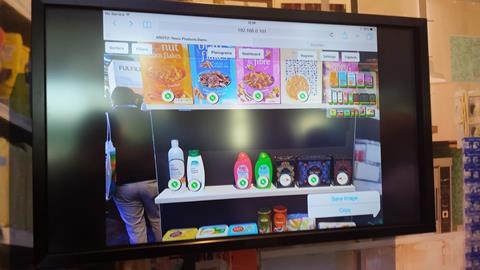 Angela Maurer, the head of the Tesco Labs innovation unit, reveals Tesco has collaborated with IBM Research to create the software, which will be trialled in-store in a couple of months.

The technology allows store colleagues to take a picture of an entire shelving unit and receive instant feedback on whether items have been correctly stocked compared to a planogram.

Items that are incorrectly positioned will be flagged on an image of what the shelf should look like with an orange line, while missing items will be identified by a red line.

The software will also be able to identify whether the corresponding prices and promotions are correct.

Maurer said: “Quite often our shelves have a few gaps and bad product layouts and don’t adhere to our planograms.

“Availability measuring is really important to us along with whether the right product is on the right promotion and this will enable our colleagues to spend more times with our customers.”

Maurer reveals it has taken a year and a half to get to the image recognition technology to its current state ahead of the upcoming trial in a couple of months.

Speaking at the National Retail Congress Big Show in New York, Maurer added that the retailer’s hackathons have helped nurture a more innovative culture at the grocer.

She said:  “Previously if they [more junior staff] had an idea there was a little bit of fear of ‘what if I share this idea and get shot down in flames?’ The hackathons have created a real buzz around the building and from that day on no one holds back.”