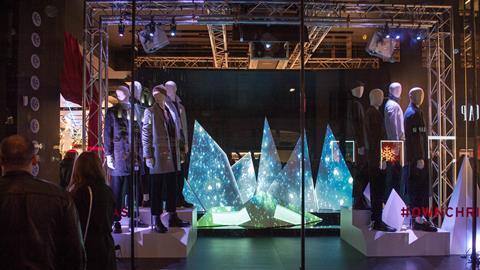 Projection Artworks has designed the projections that are mapped against the Arctic-themed geometric shapes located in the window display of its flagship Oxford Circus store.

The geometric shapes allow the creation of a 3D-style projection rather than a static display.

Different animation sequences are designed to serve a specific objective. For example, Christmas jumpers are promoted through a knitting-themed film.

Animations will run 24/7 until Christmas Eve and the light display is also clearly visible in broad daylight because it uses 4K technology.

Topman senior brand creative manager Simon Hatter said: “Never before have we used such a cutting-edge approach to create our Christmas window.

“It’s a momentous and innovative project that is sure to capture the attention of even the most jaded Oxford Street shopper.

“Not only did Projection Artworks give us a creative spectacular, they also built a system that, despite its hidden complexity, is incredibly flexible and easy-to-use. All in all, a fantastic early Christmas present.”

In-store staff are able to pick the animation on display via an app-style interface.