The number of empty shops on Scotland’s high streets has fallen in the past year to 13.7%, according to a new report. 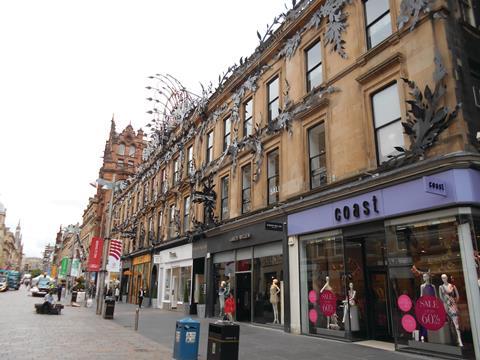 Research by The Local Data Company (LDC) and the University of Stirling found the average retail vacancy rate across the country dropped from 14.5% to 13.7%, the BBC reported.

The study found, however, that 40% of Scotland’s empty shops have remained vacant for more than three years.

East Kilbride has the highest vacancy rate of all Scottish towns, at 33%, while Inverurie has the lowest, at 1%.

The report also suggested that vacancy rates in towns have improved at twice the rate of Scotland’s cities.

The most improved towns were Anstruther, Clydebank, Dumfries, Inverkeithing, Lochgelly, Peterhead and Pitlochry.

Dundee had the highest proportion of persistent vacancy, at 11%.

The report showed that leisure businesses have played a role in reducing the vacancy rate. These businesses account for 39% of high street stock in Edinburgh and Glasgow, and more than 30% of shops in St Andrews, Fort William, Renfrew and Lockgelly.