Almost 700,000 sq ft of new retail and leisure space is poised to be built as part of an ambitious £480m regeneration of Sheffield city centre. 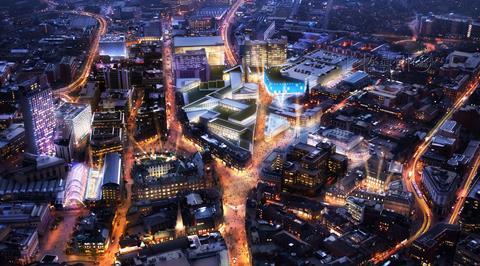 Plans for the Sheffield Retail Quarter, which has been designed by Leonard Design Architects, were unveiled this morning by Sheffield City Council.

The scheme comprises around 900,000 sq ft of mixed use space, which the local authority said will be “predominantly retail and leisure led.” Just over 200,000 sq ft has also been earmarked for residential and office space.

Council chiefs hope the project will compliment the city’s existing shopping centres including The Moor and Meadowhall.

As reported by Retail Week, Meadowhall is also poised for a £50m investment to create “distinct districts” within the centre.

The Sheffield Retail Quarter development, which will create around 2,500 jobs, could be 80% complete by 2019. The council is aiming to have all phases completed by 2021.

It is hoped the project will bring in around £291m a year in additional retail spend to the city.

“The design merges with Sheffield’s award winning public realm and world renowned cultural assets – including The Crucible and The Lyceum theatres – and unites key retail pitches in the city centre from The Moor through to Fargate.

“This will consolidate an enhanced retail offer and also provide for food and beverage, office and residential to extend the attraction as an evening entertainment destination.”

“The Sheffield Retail Quarter will change all that, propelling the city 11 places up the retail rankings, and creating a true retail ‘circuit’ between Fargate and The Moor where there is currently a disconnect.

“There are considerable unsatisfied retailer requirements for the city and many operators currently trading in the city are doing so in undersized or sub-optimal units. The new scheme will satisfy these requirements, and address the issues of current undersupply in core retail categories such as fashion and dining.”

Sheffield City Council said it was in talks with potential development partners to help deliver the scheme and hopes to make an announcement later in the year.