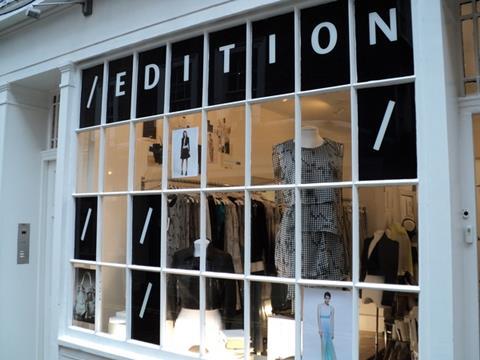 Want to know more about Debenhams?

The temporary store opened at 10am on February 10 and will trade for between six and eight weeks at 8 Newburgh Street, just off Carnaby Street.

Debenhams design director Karen Peacock said: “This store will be the first opportunity for fashion followers to get their hands on designers’ high street ‘Edition’ ranges - all of which stay true to the mainline collections seen at the spring [2011 catwalk] shows.”

Pop-up stores have become popular in the past two years as a way for retailers to expand without taking on onerous leases. Names such as Hamleys and Harvey Nichols have tried out the concept recently.

The interior of Debenhams’ pop-up shop replicates the look of the in-store shopfit for the concept, with a boutique feel in black and white with painted vintage furniture. One wall has been set aside for a display of photographs of shoppers with their purchases.

Debenhams, which has an established designer collaboration offer with its Designers At ranges, wants Edition to reinforce to consumers that it brings design to the high street at affordable prices.