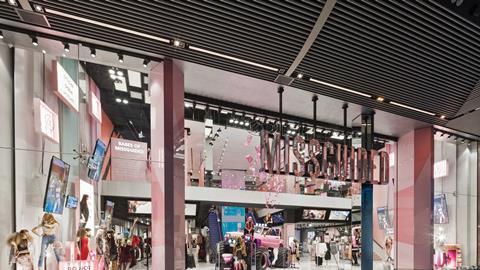 Established retailers have bent over backwards to digitise stores to attract younger consumers, yet online retailers opening physical space have stepped back from tech. Mark Faithfull asks whether retail is going back to basics.

When Missguided opened its much heralded first store at Westfield Stratford last year, there was a huge buzz about how this sassiest of online youth fashion brands would appeal to its social media-immersed, female customer base.

Here, perhaps, would be the store execution to give the retail industry the strongest example to date of how online can be invoked offline.

The answer to how it’s done, it transpired, came in the unlikely shape of a pink monster truck bedecked in jewels, pink leather, lighting and chrome features, as well as oversized doughnut tyres dripping with icing, sprinkles and pink dollar bills.

Indeed, of the many noticeable and notable features of the store, it is the absence of tech that stands out.

Yes, Missguided is outlandish and youthful. Yes, its props and pronouncements are honed for a generation of social media sharers.

But at heart, the retailer’s first store is old school – a paragon to visual merchandising, not iPads.

And it’s not alone. Fashion brands have led the way in transitioning from pureplay, accounting for 30% of all online retailers taking physical space in the UK to date, according to agent Savills.

This is followed by the furniture and homeware sector (26%) and electrical, DIY and building supplies brands (15%), according to the firm’s most recent Retail Revolutions: From Digital to Physical report.

Online retailers have been keen not simply to take space, but to reimagine that space.

In New York, online beauty subscription retailer Birchbox took inspiration from its own website when opening its debut shop in SoHo in 2014.

Co-founder Hayley Barna admits opening a store “was not in the original business plan” but that experience with events and pop-up stores convinced the company that there was a role for a shop in a high-traffic area of Manhattan.

“We wanted it to be a physical way of representing the spirit of Birchbox, and also we were aware that it might attract new customers,” she recalls, having previously viewed the boxes – supplied monthly to paying subscribers – as “a mini store” in their own right.

While online retailers at home and abroad launching physical stores are seeking to inject their brand’s personality into shops, many are giving digital gimmicks minimal attention and focusing instead on high quality customer service and overall experience. 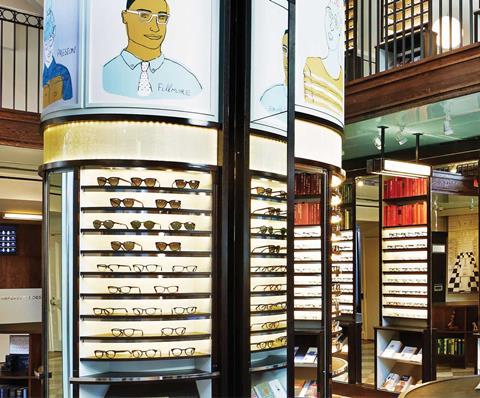 Online eyewear retailer Warby Parker took its own distinctly traditional approach to in-store theatre at its Lexington Avenue flagship in New York, which opened in 2013 and has the feel of a luxurious, smartly curated book shop.

This sends an alert to the basement inventory area, where the frames are put in a cartridge and sent shooting up pneumatic tubes to the salesfloor.

“We are undoubtedly seeing the rise in online retailers opening physical stores, but it’s likely that most will only open a handful of the stores in very high footfall locations,” says CBRE head of EMEA retail research Andrew Phipps.

He believes that it is those online propositions for which “feel and fit, service and experience” are core to the offer that will make the transition.

Phipps maintains that the reason pureplays have been successful in creating dynamic stores is because they have a better sense of where technology works and where it does not.

“Established retailers have perhaps been guilty of solving problems that shoppers didn’t have. Or of introducing screens when the shoppers have them in their own pockets anyway,” he says.

“However, if you look at the approach to payment pioneered by Apple, or the trials at Amazon over seamless payment, this is bringing in technology that has a tangible, positive effect on the retail experience.”

“Established retailers have perhaps been guilty of solving problems shoppers didn’t have. Or of introducing screens when  shoppers have them in their pockets”

Amazon’s push into physical stores with Amazon Go – a trial store in Seattle only open to the retailer’s employees – did not involve the etail giant adopting a very high-tech look.

Instead, it merged a relatively traditional looking convenience store environment with technology that allows employees to scan an app at the door and carry out their shopping without the need to queue or check out.

Various technologies make sure that people pay the correct price for what they buy at the store, which opened in 2016.

Technology choices are increasingly being directed at making customers’ lives easier, and not just for their head-turning credentials.

It is not only online retailers that have started to redefine retail space.

Athleisure brand Lululemon took a prime site on Regent Street as the flagship for its UK chain, which opened in January. 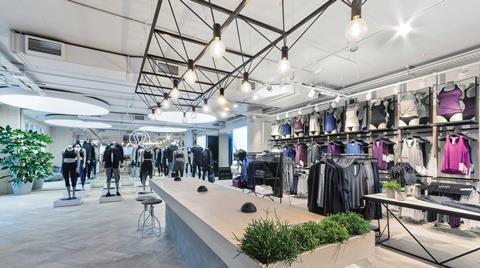 Director of store development Stephen Spencer says that part of the decision to take the former Gant flagship store was its openness.

The outcome is a shop with a long, open front and two floors that, while including social media ‘opportunities’, focus on the retailer’s famous activity classes and an upper floor cafe and lounge area.

Spencer says that the brief to designer Dalziel & Pow was to “start again” in terms of the look and layout, while digital screens emphasise lifestyle.

He cites the likes of Burberry, which may have been a trailblazer in digital investment, yet is also a very different proposition to most retail chains.

“Burberry is effectively a brand and as such the budget for the store and its digitisation is about marketing spend. That’s very different from the P&L for a normal store,” he says.

He believes that the key issue is to reconcile the need for a sustainable financial model with the advantages of an online brand within a physical space.

“Right now there is enough available space for online retailers to open up a number of brand spaces,” he says.

“However, the issue for online operators is that to open a larger chain starts to require skills that traditional retailers have and they don’t. So the question is whether it’s really in their interests to go beyond some key, experiential stores.” 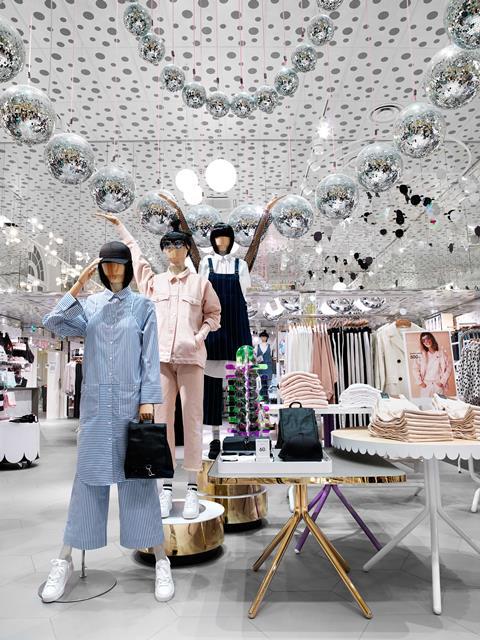 Catharina Frankander, head of store concept at H&M youth sub-brand Monki, says that the platform for the success of the chain has been in creating visually arresting environments that provide a clubby feel for the young shoppers.

While conceived as a store-first concept, Monki has adopted a similar approach to online rivals since launching in the UK in 2012.

“Right from the beginning we had a very clear ethos that there would never be product in the windows,” says Frankander.

“Monki’s interiors can be inspired by anything: youth novels, songs, quirkiness in nature, art installations or YouTube clips. When you enter a store, you step into a part of Monki’s world.

“Every display, chandelier, prop and sign is designed as part of the story, to inspire our social media-sharing customers.”

This ‘Monki world’ – a cartoon-like science-fiction thematic – is forever expanding and Frankander says that the main phase in creating a new store is the briefing stage, where the company decides on which new story to develop. 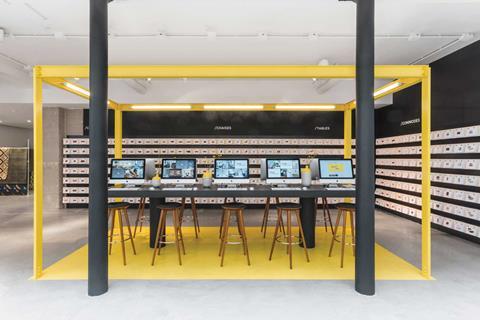 It is not just in the fashion sector where the coming together of clicks and bricks is starting to become more prominent as online players get used to occupying space and evolve their offer.

However, “in order to stay lean”, the company has sought to develop showrooms in alternative buildings rather than stores, as well as at pop-ups and concessions.

Last year Made.com took the concept further at its Paris showroom, with the introduction of technology that allows customers to add items to a wish list without having to make any purchase in-store or carry anything home.

“Everything is designed with ease of the customer and ease of logistics for Made.com in mind,” says Gregor Jackson, founding partner at designer Gpstudio.

“The whole strategy was to merge the physical and the digital so technology and innovation is at the core.

“Mini models of the furniture activate large-format, projected content in the tunnel that links the two main areas, allowing the customer to interact both physically and digitally.

“The ‘Pick Up Wall’ borrows from the idea of a database where all the details of an item are stored on a wall of notebooks and materials. Customers can add items to a wish list through iPads which scan tags on the furniture.”

But not every attempt to combine the best of digital and physical has been without problems, and Springham’s observations about how to accommodate a store within P&L norms appears to be ringing true.

Despite achieving a sales halo effect around its stores, online fashion retailer N Brown has decided to retrench and will close five of its 15 shops, including its London flagship.

Chief executive Angela Spindler said the decision was driven by “ongoing weak footfall in some locations, and with a clear focus on driving financial returns across all areas of our business”.

New models for a new world

Creatively thought-out physical hubs, such as those of Made.com, are true examples of the physical and digital enhancing each other.

“This new bricks-and-clicks model means that brands don’t need to look for big spaces to hold lots of stock and have the freedom to choose very different locations,” says Lutz.

“For example, Rockar has chosen to have its retail spaces for the likes of Jaguar and Hyundai in mall locations, abandoning the out-of-town dealership model.

“This is possible in large part because of the way the brand has chosen to harness digital.” 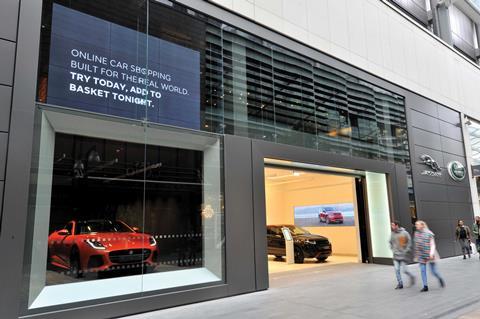 Rockar founder Simon Dixon says that the ultimate aim remains to reach new consumers and optimise online as he gradually opens new shopping centre stores such as the unit at Westfield Stratford.

“Rockar has responded to a shift in purchasing behaviour,” he says.

“Our research has revealed that customers are looking for more accessible ways to buy a car that are more aligned to how they shop for clothes, food and gadgets.”

“Rockar responded to a shift in behaviour. Our research has revealed that customers are looking for more accessible ways to buy a car”

Missguided, too, has adapted as it opens further stores, including at Land Securities’ Bluewater shopping centre earlier this year.

Like the debut Stratford store, it has been designed to create an immersive brand experience while shoppers browse, but does still embrace some technology, with floor-to-ceiling digital screens at the entrance and above the cashier desk that display the most recent campaigns.

While retailers have been racing to introduce digital screens and other bold technologies, online-to-physical retailers have been making store debuts that are less about the bright lights of technological eye-candy and more about brand, and the innovations that will create an experience that is memorable for their shoppers for all the right reasons.

While technology will undoubtedly remain fundamental to how people shop in store, the new wave of pureplays launching physical stores may well encourage retailers to readdress the bricks and clicks balance and return to basics, building on what it is that makes a specific brand appeal to its customers.

This feature appears in Retail Week’s Property supplement, out this month. Read the supplement in full here.