Store Twenty One has won a stay of execution after a court allowed it two more weeks to raise the money needed to avoid administration. 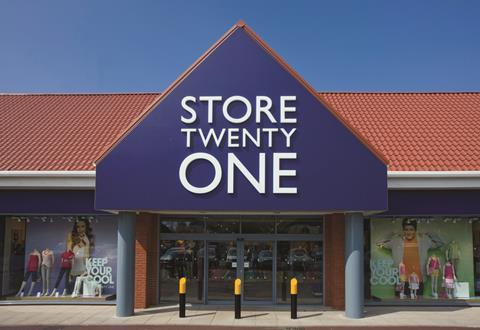 As Retail Week revealed earlier this month, the discount retailer filed notice to appoint administrators after defaulting on rent payments previously agreed with landlords through a CVA arranged last July.

The fashion retailer was also presented with a winding-up petition by HMRC on April 12 in relation to unpaid taxes.

Now HMRC and the retailer’s lender, the State Bank of India, have agreed to give Store Twenty One management more time to raise the cash.

Store Twenty One owner Alok Industries is being forced to sell its head office and warehouse to satisfy creditor demands.

Retail Week understands that Alok House, based on Solihull’s Drayton Road industrial estate, was put up for sale around two months ago.

It is now under offer and is expected to be sold for a sum in excess of £3.2m within the next month.

Store Twenty One advisor Alix Partners said in a statement: “The administration order hearing was adjourned until 9th June to enable the company more time to continue its refinancing discussions.

“The adjournment was made with the consent of the petitioning creditor and the company’s lender.”

Around 1,000 jobs now hang in the balance at the embattled fashion retailer as it races against the clock to secure additional cash.

Retail Week previously reported that Store Twenty One staff had accused the retailer of failing to pay wages in full or on time.

Employees now allege that is happening once again and that pension payments have also stopped.

“For several months we have been paid anything up to a week late and in some instances have only been paid in blocks of 25% one day then a few days later 25% and the remaining 50% another week later,” one staff member alleged.

“We have also found out in the past week that pensions have not been paid for several months.

“Enough is enough now, people are getting excessive bank charges and cannot live like this. I fear that the company are leading people along with promises of this and that and they don’t have anything to give any more.”