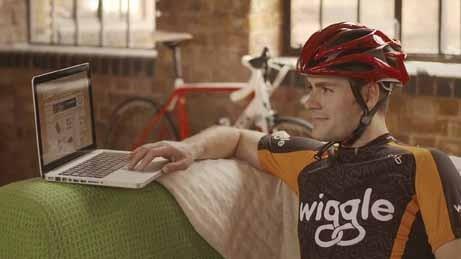 Wiggle has reported an 11.5% jump in full-year sales, helped by a strong UK performance, and is targeting further growth by opening a £10m distribution centre.

The cycling, running and triathlon clothing and equipment etailer said revenues were £179m on a constant currency basis in the year to the end of February. Underlying EBITDA jumped 16.7% to £7m.

UK sales climbed 26%, and Europe revenues increased 20%. However, rest of the world sales slipped 13.1% as currency headwinds took hold, leading to a 47% drop in reported earnings.

Wiggle’s chief executive Stefan Barden said that Australia and Japan were particularly badly affected by currency exchange. Despite this, he said Wiggle “trades well” in Australia and opened an office in Sydney this year. “It’s important to have an operation in the southern hemisphere to help with brand relations and sourcing,” he said.

Overall, Barden said he was “very pleased” with the group performance and that sales growth had also increased in Wiggle’s current first half.

One of Wiggle’s rivals, Halfords, last month warned it had seen falling cycling sales over the summer.

Wiggle, owned by private equity group Bridgepoint, last month opened a 320,000 sq ft distribution centre in Bilston, near Wolverhampton. The site will give the etailer sales capacity of up to £750m.

Its head office will remain in Portsmouth.

Barden said Wiggle is driving down costs by “simplifying its business”. However, he maintained that would not mean job cuts. “We are growing more quickly than the need to take out cost,” he said.

The etailer is also in the process of testing a Wiggle app in beta, which is expected to launch on the iPhone in the coming weeks, Barden revealed.

Wiggle is around half way through a three-year strategy, which has seen it cut the number of countries it operates in from 120 to 70 to focus more on Europe.