Smiggle to launch transactional website in UK this January

Australian stationery retailer Smiggle will launch a transactional website in the UK this January as a statement of intent. 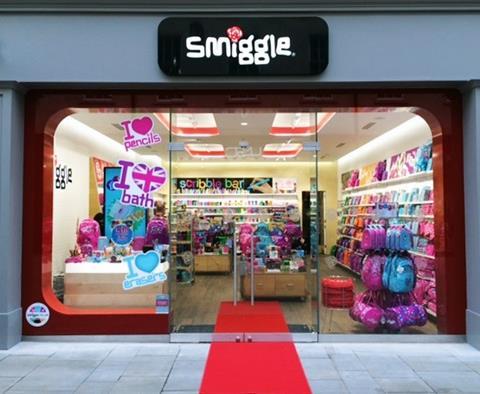 The company’s UK web presence currently consists of a microsite on the retailer’s Australian website, but now the stationer is planning to roll out a standalone website.

“The advocates for us are the kids in the playground”

Smiggle managing director John Cheston said: “If you do not have a transaction website now you look pretty amateur and we are not an amateur company – we have a market cap of around 1.5bn Australian dollars.”

Smiggle launched its Australian transactional website over four years ago, but Cheston says the website makes up a “tiny” percentage of overall sales due to the nature of the business.

The retailer targets children aged six to 14-year-olds and as a result most of its sales come from children’s pocket money, meaning online transactions through credit cards are limited.

Cheston said that despite online not making a large proportion of sales he believes a transactional website is a necessity because of its importance as a “marketing tool”.

Cheston predicts that as the company’s online sales could be higher in the UK because it is a more mature online market.

Smiggle has plans to roll out up to 300 stores in the UK and Cheston is in the process of touring the country to identify more locations.

There are plans for 30 stores by July, 50 by next December and an additional 50 each year in subsequent years.

The retailer is focused on clusters of stores and is in the process of building up clusters in the Southeast, but has plans to build a cluster of stores around Manchester next year.

Cheston said: “I’m at pains to say we are just focusing on the Southeast because we are not. We are not a north/south divide brand or a brand just for affluent kids.

“We do not advertise what we do. We let our marketing be the best location in the best shopping centre with the best fit out and the advocates for us are the kids in the playground.”

All Smiggle’s 116 stores in Australia are profitable and Cheston forecasts Smiggle will be profitable in its next financial year, which ends August 2015.