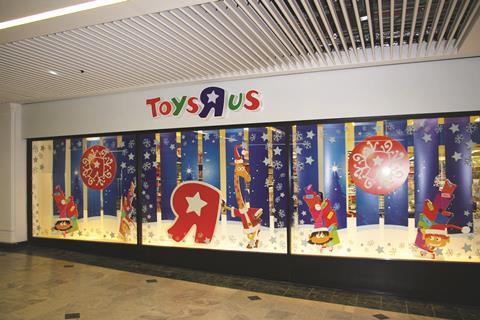 Toys R Us has opened its first shopping centre store as part of a pop-up offensive to maximise Christmas sales as the golden quarter nears.

The shop will be the first of six permanent and temporary stores to open across shopping centres and retail parks before Christmas.

The US toy giant is among a raft of retailers to launch temporary stores for Christmas this year, including first-timers such as JD Sports-owned Bank and value department store group Original Factory Shop.

Toys R Us’ 10,000 sq ft shopping centre pop-up was scheduled to open yesterday in Whiteleys, the Standard Life-owned mall in London’s Bayswater, and is a departure from the specialist retailer’s standard 15,000 sq ft to 45,000 sq ft stores located on retail parks.

Shoppers will be able to use tablets to browse and order from the extended range online.

Toys R Us marketing and ecommerce director Mike Coogan said: “We are not abandoning retail parks. We are trying new areas and it just so happened we have this shopping centre site. The store is a test.”

The 81-store retailer has opened Christmas pop-ups on retail parks in the past but Bank, which launched the first of a handful of pop-ups in Peterborough’s Queensgate centre, is a newcomer to temporary openings, as is Original Factory Shop.

Seasonal stores enable retailers to trade from increased space at the busiest time of the year without being saddled with the costs associated with permanent shops.

Planet Retail analyst Lisa Byfield-Green said: “It makes sense for Toys R Us to open pop-ups in shopping centres because it can take advantage of the gap that the closure of Early Learning Centres has left.”