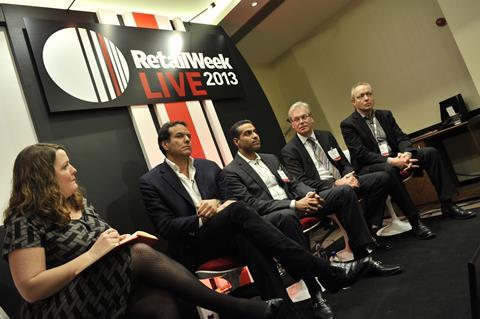 Speaking at Retail Week Live, Grimsey said retail parks will eventually be in a similar situation to the high streets due to the increasing popularity of online and a fall in consumer spend.

But during a panel debate about the state of the high street, John Lewis property director Jeremy Collins said it is not as straight-forward as saying retail parks would fail. But he added: “Those where there is too much competition and not enough demand will eventually go.”

99p Stores boss Hussein Lalani disagreed. He said people will continue to enjoy looking at the physical product when shopping. “People still want to see and touch [the product],” he said.

He added that the Government should help retailers to trade by freezing business rates this year or by offering rates discounts for start-up businesses.

Collins said the Government should “stop taxing a sector that is effectively unable to protect itself at a level that is too high”. He added that it didn’t make sense to tax one of the biggest employers in the economy.

“We need some balance there,” Collins said.

Online furniture retailer Made.com and Mydeco.com co-founder Brent Hoberman said more businesses will embrace the idea of showrooming as online retailing grows, meaning more will do the majority of their trading online, with only a few stores to showcase the product.

Retail Week and the British Retail Consortium have been lobbying Government through the Fair Rates for Retail campaign to freeze business rates this year and save the sector from an estimated additional £175m in rates bill.