It is a business imperative to address culture in order to tackle inequality, said a panel of retail experts at Retail Week Live. 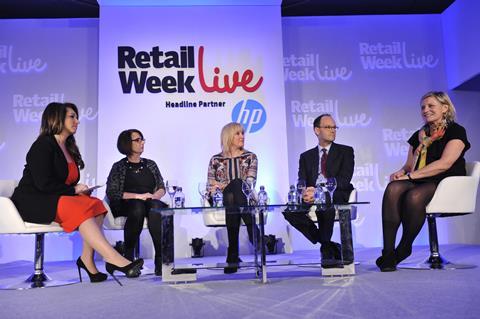 Business culture needs to change in order for more women to take on senior positions within retail companies.

Jacqueline Gold, chief executive of Ann Summers and Knickerbox, pointed out at the beginning of the panel session at Retail Week Live 2015 in London today that only 13 out of 100 people on Retail Week’s Power List are women.

“I think these facts are pretty frightening – we need diversity to improve dynamics” she said, explaining that boards that have two to three women on their boards outperform those who do not.

“If there’s one thing retailers could do is look around at their culture. Are they creating an environment which is female friendly, which is allowing and encouraging talented women to come up through the ranks?” she said.

Also on the panel was Sainsbury’s boss Mike Coupe, who said he couldn’t conceive the idea of working on a board without a female representation, as he’s been lucky enough to always work on mixed boards.

“You would just miss a huge amount of viewpoint,” he said. “Women work in a different way and add much more colour.”

Gold pointed out that retail customers consist 70% of women. “It is madness, when you’re making your purchasing decisions, you’re missing out.”

“On the surface retail comes out better than most sectors, however, we have to be more mindful that we employ more women than other sectors and our customer base is a high demographic of women, so really our boards should be reflecting that, and I think probably we’re not as good as we are on paper,” she added.

Coupe continued: “I’ve learnt over the years that women think differently from men – I’ve sometimes had to learn the hard way,” he laughed referring to being the only man in his household. “But our customers are predominantly women and you get a more diverse range of views, or a completely different perspective.”

Conservative MP Caroline Dinenage said boardrooms aren’t balanced because there is not a pool of women to apply for the jobs. She said women need mentors and role models to encourage their career progression from an early age.

“There’s a culture feel that they can’t apply,” she said. “Guys have informal mentoring, like they go and play golf, there are lots of opportunities for guys to network exclusively of women.”