Sports Direct boss Mike Ashley has urged MPs to “take the bull by the horns” to save British high streets from “a downward death spiral”.

Ashley issued the stark warning to members of the housing, communities and local government committee as part of a session exploring what UK high streets and town centres would look like in 2030.

The billionaire tycoon issued a host of recommendations to MPs, imploring them to “immediately tax the internet” in order to give high streets “a massive electric shock”.

During a session that lasted almost 90 minutes, Ashley proposed:

In an occasionally heated exchange that opened with a series of questions relating to his acquisition of House of Fraser and Sports Direct’s use of zero-hours contracts, Ashley was eventually asked about his vision for the high street of 2030. 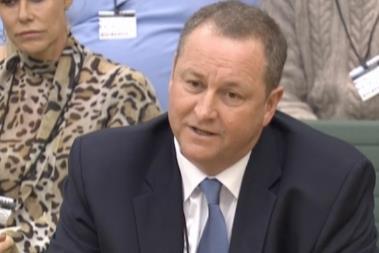 He added: “The question is what to do about it. If you want to save the high street, you have to address that problem. It’s as simple as that.”

He said that constituted “the majority” of shopping thoroughfares in the UK but the government could help save “the minority”.

Ashley proposed the introduction of a “massive electric shock” to high streets in the form of a new sales tax, which would come into effect on retailers making more than 20% of their sales online.

Ashley added that councils should be “empowered” to offer retailers “free rates for five years” on the condition that retailers “matched every pound of free rates with a pound of investment that has to just go in that site”.

Ashley also called for landlords to slash “prehistoric rents” by as much as 25% but admitted MPs “can’t really regulate what a landlord is able to charge people in rent”.

However, he urged them to act “now” on the issue of an online tax and warned: “Unless you do something really radical and grab the bull by the horns, [the high street] won’t be there.

Revo chief executive Ed Cooke said: “It is hard to disagree with Mike Ashley’s comments that a massive electric shock is needed to revive high streets that are flatlining.

“We are campaigning for the introduction of a fairer tax system, including some form of online sales tax, that recognises the changing role of online and physical retail and encourages investment back into stores. It remains to be seen if the model proposed today would work.

“Today’s evidence session underlined that collaboration – by all stakeholders – is key to saving the high street, and to that end we will be inviting Mike to attend our inaugural CEO Summit next Spring to debate these issues further.”