Value department store group The Original Factory Shop has strengthened its top management with the poaching of a Halfords executive. 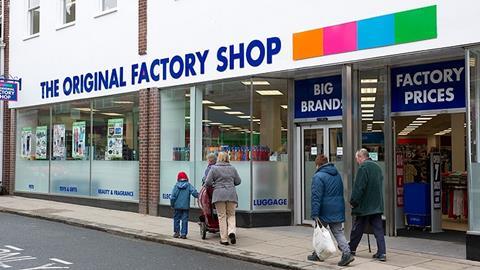 Want to know more about Halfords?

He will lead the formerly separate buying and merchandising departments in an integrated trading unit.

The Original Factory Shop chief executive Angela Spindler said she was delighted to appoint someone of Brown’s calibre.

She said: “The creation of this role and the strengthening of the team are testament to The Original Factory Shop reaching the next phase of its growth story. Steve brings a breadth of retailing experience.”

The 166-store business, which describes itself as a “non-food convenience retailer”, is controlled by Duke Street Capital, which backed a £69m secondary buy-out in 2007.

Spindler, a former Debenhams managing director and boss of Asda’s fashion business George, has said there is scope to open a further 400 stores in the long term.

The retailer is close to completing the expansion of its Burnley warehouse from 135,000 sq ft to 240,000 sq ft in anticipation of continued growth of its store network.

Last year sales hit £132m and it has increased profits by a double-digit rate for five consecutive years.

Brown was placed by Fran Minogue while she still worked for Heidrick & Struggles.