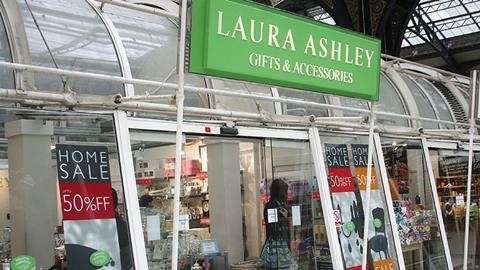 Laura Ashley’s UK performance is on song after what have sometimes been turbulent times for the legendary retail name.

The homeware and womenswear retailer this week reported like-for-like growth in its domestic market of 5.4% in the 18 weeks to June 2.

Laura Ashley has slimmed down its store estate, reworked its international operations and developed an online and mobile business spurring strong growth in the last decade.

Founded by Laura Ashley and her husband Bernard, the retailer sold through John Lewis and Heal’s stores in the 1950s before opening shops in London in the 1960s. Laura Ashley evolved and thrived in the swinging Sixties before branching out internationally the following decade.

In 1985, Ashley fell down the stairs of her daughter’s English country home and died 10 days later. The accident happened just weeks before the company floated on the stock exchange.

The retailer spent much of the 1990s in difficulty, triggered by the deep recession at the start of the decade, as it wrestled with trading and management problems which took it to the verge of bankruptcy.

Malayan United Industries subsidiary MUI Asia acquired 40% of Laura Ashley’s shares in May 1998 and the Ashley family sold most of its remaining holding in 2001.

Ng Kwan Cheong, formerly managing director of Malaysian retailer Metrojaya, became Laura Ashley’s chief executive in 1998 and took up the position again in January following the departure of Lillian Tan Lian Tee, who had held the role since 2004.

Under the Malaysians’ ownership, Laura Ashley changed its offer significantly.

Its international arm was restructured in 2003. All but a handful of its wholly owned stores in Europe were shut and replaced with franchised units. The retailer now has franchise operations comprising 250 stores in 29 countries, as well as six company-owned stores in France.

In the UK, Laura Ashley trades from a nationwide network of its own stores and some concessions. Most of the latter are in Homebase stores, although a number were closed following under-performance during the 2000s.

The retailer suffered poor profitability in the early 2000s when it was held back by sluggish clothing sales. Management subsequently implemented a plan to reduce the relative importance of clothing in the UK sales mix in favour of home products to an 80/20 ratio.

As a result, the retailer opened 17 standalone homewares stores in 2001, increasing the average store size in the ensuing years. The decision to move to larger stores followed a shake out over the mid-2000s of underperforming units and a number of concession closures.

By 2006/07 the downward trend in group sales had been halted and the retailer performed well until recession once more halted its momentum in 2008.

In the last two years performance has again stepped up, buoyed by online sales growth which has outstripped a decline in its traditional mail order business.

As results have improved the retailer has explored other sales routes. In 2008, Laura Ashley opened its first branded designer outlet stores – three of the four outlet have since closed – as well as a new Laura Ashley Gift & Accessories store in London’s Liverpool Street Station in 2009.

Last year the retailer also introduced its own home interior design studios as part of a longer term  ambition to establish itself as a market leader in design.

Cost control has been key to recent profitability and the outlook remains challenging. Retail Week Knowledge Bank’s company profile says: “The particular challenge now facing management is to hold its nerve in the face of ongoing turmoil in terms of the previously more benign market environment being replaced by an altogether more difficult one in which bigger ticket items, in particular, have become increasingly difficult to shift.”