John Lewis has reported that sales rose year on year last week in every one of its 40 shops helped by favourable comparatives and strong homewares sales. 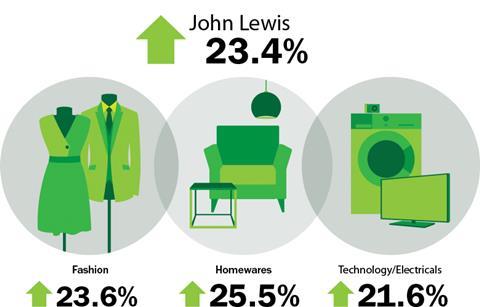 John Lewis’ sales rose 23.4% to £73.4m against snow disruption last year and buoyed by a 25.5% increase in sales in its home department driven in part by customers buying beds.

Stores under its ‘at home’ fascia were the strongest performing with Tamworth, Chichester and Poole among those recording the best growth as shoppers chose the department store amid the traditional new year home and furniture Sales.

Fashion sales increased 23.6% aided by a good performance in women’s accessories and beauty, in particular, sales of handbags surged.

Sales of electricals rose 21.6% with audio products up 50%, lifted by the success of music streaming products. Small electricals sales were up 3%, driven by kitchenware.

John Lewis head of retail implementation and format development Tim Harrison said: “On overall sales it was a resounding success for all three directorates, but home produced the strongest result.”

Online sales were up a staggering 87.9%. Waitrose commercial director Mark Williamson said: “Many people chose to order their groceries online with huge growth in demand for the service.

“Compared with last year, orders are up by almost 120% and this has been helped by our doubling of online capacity across our branches and at our Dot.com Fulfilment Centre (DFC) in Acton.”

Waitrose will open its second DFC in Coulsdon, south London in the autumn to meet the surge in demand.

Williamson added: “Our customers appear to be keeping to their healthier resolutions, too, and we’ve seen a sustained surge in demand for healthier products.

“The New Year has added to the appeal of healthier protein sources. Sales of lemon sole fillets jumped 166% and whole salmon leapt 112% and our fish pie mix was up by an incredible 360%.”