John Lewis and Waitrose sales increased in the week to September 21 as the cooler weather shifted autumn stock. 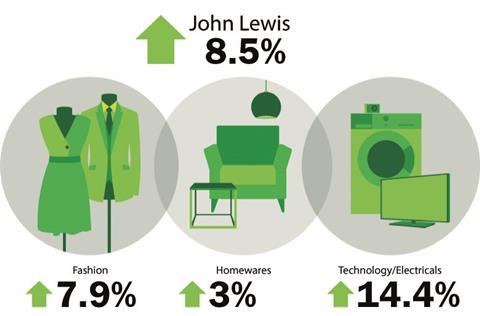 John Lewis said the electricals and home technology category was the star performers across the week, up 14.4% against last year as customers bought large appliances, televisions and cameras. Meanwhile, its tablet sales recorded a rise on tough figures last year.

Waitrose recorded a sales rise across its warming foods, as its Hereford beef sales rocketed 182% and slow-cooked meats were up 39%.

Waitrose said BBC cookery show The Great British Bake Off had driven sales of homebaking products, which surged 12% last week with sugar up 17% and pastry up 24%.

In addition, the food retailer said customers are buying organic produce as some products have “outstripped” growth from their conventional counterparts.

Waitrose’ online sales soared 42.7% in the week, while bookings “leapt” at the Waitrose Cookery School.