Dutch retailer Jumbo, the second largest grocery operator in the Netherlands, is gaining attention for its new Foodmarkt fascia.

Combining low prices with a focus on fresh foods, Foodmarkt offers in-store food services under the ‘eat it, make it or take it’ mission statement.

Opened in November 2014, the Jumbo Foodmarkt at Amsterdam Noord was the second store under the fascia, following its launch in Breda.

Jumbo has opened three Foodmarkt outlets, with the intention of opening another 10-15 over the next few years. These future stores will be larger than 50,000 sq ft in size – significantly larger than a typical Jumbo.

A key element of the Foodmarkt concept is the focus on serviced counters and meals prepared fresh in store.

A number of counters offer a wide range of foods from around the world, taking in pizza, sushi, tapas and Asian wok, as well as a separate area specialising in vegetarian dishes. 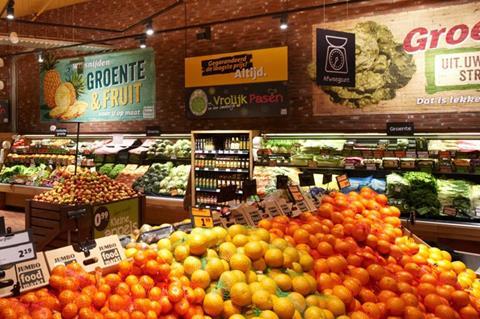 Foodmarkt offers food from around the world

One of the most impressive elements of this range is that each area or counter has its own distinct look and style, helping lend a perception of authenticity and excitement to proceedings.

The store also benefits from higher service levels than a typical Jumbo and this is clear from the number of staff preparing food in view of shoppers.

In fact, Jumbo was keen to highlight that its Foodmarkt stores top customer satisfaction surveys across the chain, with customer services being highlighted as a key differentiator.

As part of its ‘eat it, make it or take it’ approach, shoppers are actively encouraged to consume their purchases in store.

To facilitate this, it features an accessible restaurant area immediately adjacent to the fresh counters. Here, shoppers can take any just-purchased ready meal or snack and have it warmed up for instant consumption.

Although Foodmarkt has the look and feel of a ‘premium’ store, including an enhanced offering of local and organic produce, a key element of the concept is to appeal to the whole spectrum of consumers.

This approach is cemented by Jumbo’s low-price guarantee, with shoppers eligible for a refund if they can find the comparable product cheaper elsewhere.

Jumbo Foodmarkt is one of the best concepts in terms of providing a mix of new features and services increasingly being demanded from modern consumers, while also retaining its feet on the ground enough to have mass appeal.

With more stores in the pipeline it will be interesting to see how the concept evolves, while also monitoring successful elements that are adopted by the core Jumbo estate. Already some successes, such as pick ‘n’ mix tomatoes, have found their way into the supermarkets after success in Foodmarkt.