Sales at John Lewis rose 4.2% last week as a strong performance in electricals offset weak trading in fashion and homewares. 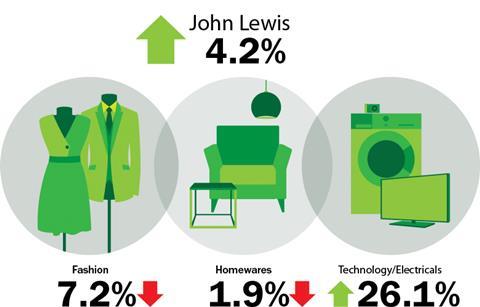 The department store group, which notched up sales of £62.6m, recorded a 26.1% boost in electricals and home technology purchases, driven by tablets and large electricals.

However, fashion sales fell 7.2% despite strong performances in menswear, jewellery and the haberdashery.

John Lewis’ home department enjoyed good sales in carpets and textiles as shoppers made purchases ahead of the bank holiday weekend, but overall home sales fell 1.9%.

John Lewis director of selling David Barford said: “Overall we had a positive week’s trade with sales up 4.2% on last year. With the week seeing four seasons of weather in most of the country in as many days and summer only managing to show its face occasionally, the traditional summer pre-bank holiday sales pattern was less consistent.

Barford added: “As we move into the summer period we have the Jubilee and Olympics to compete with from last year, but as we started this week with some wet and windy conditions we are well placed to make the most of the shopping weather.”

Waitrose sales were up 5.7% on last year at £117.1m with both hot and cold weather driving sales of salads and soup simultaneously.

The grocer said its horticulture sales were up 26%, helped by the Chelsea Flower Show, while the early half term drove sales of travel products, which rose 58%.