Aldi has overtaken Waitrose to become the country’s sixth largest supermarket, according to the latest Kantar figures. 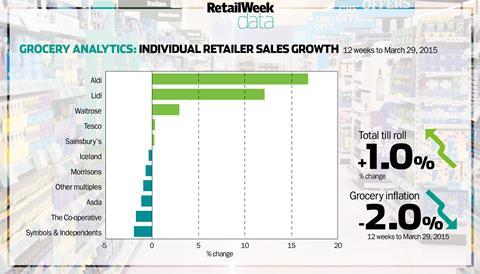 The German discounter Aldi has notched up 5.3% market share in the quarter ending March 29, compared with Waitrose’s 5.1%.

Aldi achieved sales growth of 16.8%, the highest rate of growth in the sector, although slower than its recent performances.

Its upmarket rival’s sales increased 2.9% during the period and Waitrose has grown sales in an unbroken run dating back to March 2009.

Aldi joint managing director of buying Giles Hurley said: “Our unique ability to offer UK shoppers outstanding quality products at everyday low prices is key to driving our growth as reflected in recent Kantar Worldpanel figures showing our 5.3% market share and our position for the first time as the UK’s sixth biggest supermarket.”

Kantar Worldpanel head of retail and consumer insight said Fraser McKevitt: “Aldi has recorded double-digit sales growth for the past four years and is now Britain’s sixth largest supermarket with 5.3% of the market.

“Growth has been fuelled by over half a million new shoppers choosing to visit Aldi this year and average basket sizes increasing by 7%.”

Tesco also grew sales by 0.3%, while Asda and Morrisons sales declined by 1.1% and 0.7% respectively as all the big four recorded a decline in market share.

“Firstly, the so called discounters Aldi and Lidl now command a combined 9% share of the market. In 2012 the same two retailers only accounted for 5.4% of grocery sales. Secondly, the 72.8% share taken by the biggest four retailers is now at the lowest level in a decade.”