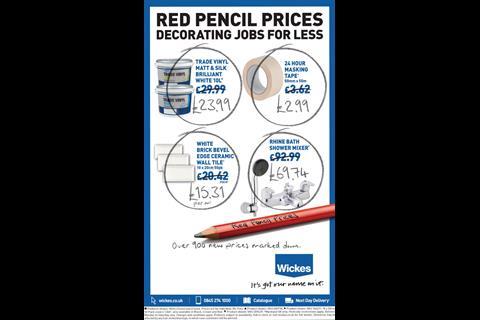 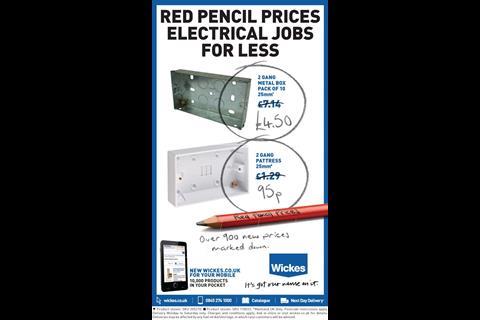 DIY retailer Wickes is ploughing £10m into lowering prices as it shifts towards an Everyday Low Prices (EDLP) strategy to better cater for cash-conscious customers.

The retailer will fund the investment by closing its MyCard loyalty scheme later this month.

More than 1,000 prices have been cut already this month and brand marketing director Tony Holdway said the retailer will launch two further “major price reductions” this year. He said by the end of the year Wickes will have slashed prices on 5,000 of its 10,000 SKUs.

Some plumbing lines have been reduced by 20% while timber prices have come down by 15% for instance. “People want low prices all day every day so this plays to our customers’ needs,” said Holdway. “These are serious reductions. We’ve chosen the products that are most going to help our customers. They will be core products for DIYers.”

Holdway said Wickes would still mount promotions during the peak period but that it is “definitely moving towards” an EDLP price architecture.

Wickes will run advertising to spotlight the initiative as well as flag the new prices clearly in stores under the Red Pencil Prices banner.

The loyalty scheme will shut on June 22 but the 1 million members of MyCard will be able to redeem points over the next 12 months.

“In an ideal world we’d do both but we made a business decision to push the investment into price,” said Holdway. He said the new pricing was primarily aimed at trade customers but that consumers would benefit too. In the present climate he said trade customers are trying to keep work quotes as low as possible. “This is the biggest thing we can do to help,” he said.

Rival B&Q adopted an EDLP stance this year on big-ticket items to create a more transparent pricing policy and avoid a hard-to-manage spike in the January Sale period.

Neil Saunders, managing director of consultancy Conlumino, said an EDLP stance is useful in ongoing tough trading conditions. “Consumers are being squeezed and are looking for very keen pricing, particularly in DIY which is needs-driven,” said Saunders. “It should help Wickes grow market share.”

Saunders expected more retailers to follow suit as they aim to compete more effectively on price.  Asda was one of the first retailers to adopt EDLP in the UK. The strategy was pioneered by its parent, Walmart.