Topps Tiles has posted a jump in full-year profits as investments in growing its range and enhancing its store portfolio bore fruit. 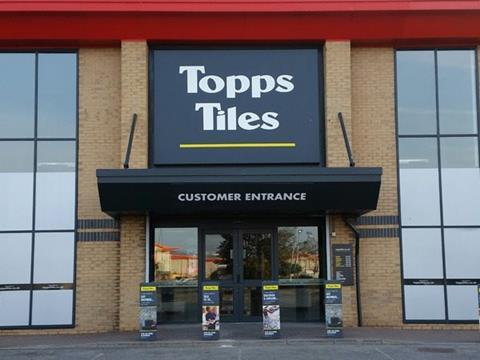 Topps Tiles’ sales increased 4.2% on a like-for-like basis on the prior year

The tile specialist unveiled a 17.6% spike in statutory pre-tax profit to £20m during the 52 weeks ending October 1.

Adjusted profit before tax, which excludes items “not representative of underlying performance”, climbed 7.8% to £22m.

Topps Tiles said sales increased 4.2% on a like-for-like basis compared with the prior year, while total revenues rose 1.3% to £215m.

The retailer said sales were boosted by its continued investment into developing new products.

Of all tile revenues it generated during the year, 12.6% came from ranges launched within the past 12 months.

Topps also hailed the impact of its ongoing focus on rejuvenating its store portfolio.

It opened 19 new stores during the 52-week period – including four rebrands and two relocations – and closed 15.

The retailer refitted a further 15 stores as it continues its drive to modernise its estate and become more accessible to a wider customer demographic.

Topps said it plans to launch around 15 new shops in its current financial year.

The floor coverings business boosted its gross margin from 61.2% last year to 61.9% in 2015/16, aided by its decision to pull away from the low-margin wood flooring category and focus exclusively on its core tile ranges.

However, it warned that negative consumer confidence, which has plunged during the second half of the year in the wake of the Brexit vote, could impact performance.

“Our proven strategy, well-invested business and market-leading position leave Topps well-placed for further progress in the year ahead”

Topps said: “While consumer confidence has improved from its immediate post-referendum low, the measure remains in a slightly negative position.

“The further implications for consumer confidence and the subsequent impact on our business remain unclear and we will continue to monitor the economic data available closely.”

Despite concerns over consumer confidence, Topps said like-for-like sales edged up 0.8% during the first eight weeks of its new financial year.

The retailer’s boss Matt Williams said: “I am pleased to report that Topps has delivered a strong performance for the year, with our unrivalled combination of range, inspiration and convenience resonating with more customers and driving sales to a new record.”

On the improvement in like-for-likes since the start of Topps’ new financial year, Williams added: “Our proven strategy, well-invested business and market-leading position leave Topps well-placed for further progress in the year ahead.”