Chancellor of the Exchequer George Osbone has credited Screwfix as “a great British success story” after the retailer said it would create 900 new jobs in 2015. 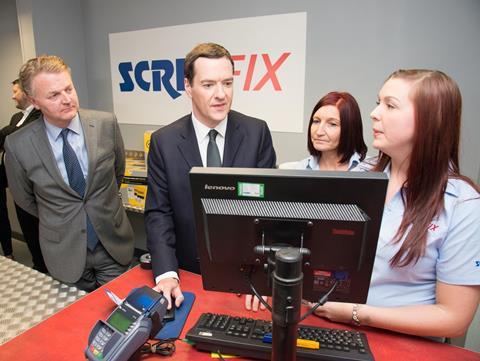 The job creation will come as Screwfix opens 50 new stores next year as it continues its rapid expansion, which Osborne says has been aided by his economic plan.

Speaking at a Screwfix store in Cannock, he said: “Backing businesses who are expanding is a key part of our long-term economic plan which is why I have cut corporation tax, introduced the employment allowance, and abolished National Insurance contributions for the Under 21s.

“These changes are helping companies like Screwfix create jobs and the economic security that comes with that.”

Osborne’s visit is part of the second leg of the Chancellor’s Great British Brands tour, which is celebrating companies creating jobs, helping people into work, driving exports, and proving the UK is a leader in science and innovation.

Screwfix chief executive Andrew Livingston said: “At Screwfix we have seen increasing optimism among our trade customers for some time now, which not only represents potential growth across the industry, but also increasing employment opportunities in all sectors, which is great news for the UK economy as a whole.”

The new job creation is in line with the company’s recent growth with the retailer on course to create 900 jobs for the year ending January 31, while the company also created 900 jobs in the last financial year.