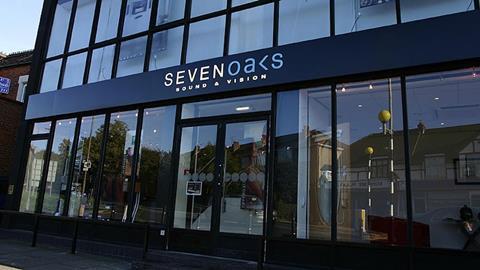 The tie-up is expected to be completed “dependent upon the successful outcome of a period of joint marketing and purchasing”.

Both names will continue to be used and the intention is to use the enlarged business as “a springboard for expansion”.

The merger comes as small specialists in the sector come under increasing pressure from the leading groups and the competitive ante is upped. US giant Best Buy has opened its first big-box store in the UK, Dixons-owned chains Currys and PC World have been revitalised and Comet is increasingly emphasising its mid-sized stores as a point of difference.

A Sevenoaks Sound & Vision statement said: “We will optimise the considerable advantages that the link is going to give us to improve choice and service to our customers, which will in turn make our individual stores more successful and the jobs more secure.”

In addition to competing against rivals with bigger stores, he said smaller companies found it difficult to establish their brands online because they were less well known than the market leaders.

Gregory said: “One of the ways the smaller groups can survive is by joining one of the European buying groups or by merging.”

Audio T was founded in 1966 and trades through 23 shops, online and mail order. It merged with two other smaller companies in 2008.

Sevenoaks Sound & Vision, which has a network including franchised stores trading from Aberdeen to Yeovil, was established in 1972. It has recently launched installation centres to create and install bespoke home entertainment systems.