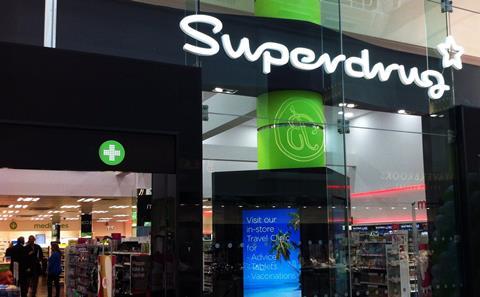 The retailer, owned by China’s AS Watson Group, said its like-for-likes rose 7.2% in the five weeks to January 2.

The rise was higher than the 6.8% achieved in the same period last year, Superdrug said.

Make-up was a star performer in the most recent period, with sales up 10% as “customers treated themselves to new cosmetics for the party season”, Superdrug said.

The retailer’s gift ranges had their “best ever Christmas”, as beauty advent calendars recorded sales of more than £1m.

Online sales during the period jumped 47%. Superdrug said nearly 40% of orders in the week prior to Christmas were collected from stores.

AS Watson’s health and beauty UK boss Peter Macnab said: “This Christmas we concentrated on offering customers as many reasons as possible to shop at Superdrug – from market leading prices to a wealth of free gifts.

“We also added interest to our stores with more beauty and health services, and this is something we look forward to building on next year.”