Waitrose has this week launched a high-end range in collaboration with three top chefs as it seeks to reinforce its position as a food specialist. 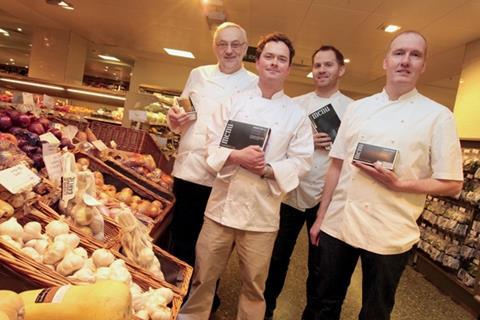 The range, called Menu From, will initially include 68 dishes, all of which require little or no preparation to cook. The dishes have been created by Waitrose executive chef Neil Nugent in collaboration with chefs Pierre Koffmann, Anthony Demetre and Bryn Williams.

Waitrose managing director Mark Price said: “We are always looking at ways to push the boundaries with food so we challenged the team to come up with dishes that would not look out of place in a restaurant.”

Menu From, which went into stores on Wednesday, contains some well-known favourites that have been given a twist by the chefs.

Dishes - comprising starters and main courses - include navarin of lamb for £8.99, inspired by items found on menus of Demetre’s London restaurants Arbutus and Wild Honey, and a beetroot and goats’ cheese tart for £3.99 using flavours from the vegetarian taster menu at Williams’ restaurant Odette’s.

Price said: “There are classics on the menu but everything has been given a twist to make it special for Waitrose. You couldn’t get anything near the quality of these dishes in any other supermarket.”

Waitrose launched its Essential entry-price range last year, which Price said helped the grocer deliver like-for-likes up 9% over Christmas. It is also expanding its Frozen range with items such as frozen risotto and croissants, and will launch a fuller Duchy Originals range in May.

Before the launch of Menu From, Waitrose’s customer research found 43% admit that impressing guests at a dinner party is more important than cooking a meal from scratch - even if it means buying ready meals.

The poll of 2,000 people found a third would buy pre-prepared canapés and 15% would pass off their mum’s home-cooking as their own.