Tesco unveils Jack's fascia in bid to stave off discounters

Tesco has unveiled its new fascia, Jack’s, launched as a rival to discount chains Aldi and Lidl.

The new brand’s first two shops in Chatteris, Cambridgeshire, and Immingham, Lincolnshire, open to the public tomorrow. The grocer will open another 10-15 over the next six months on a variety of sites including underperforming convenience stores, new sites and next door to existing Tesco stores. 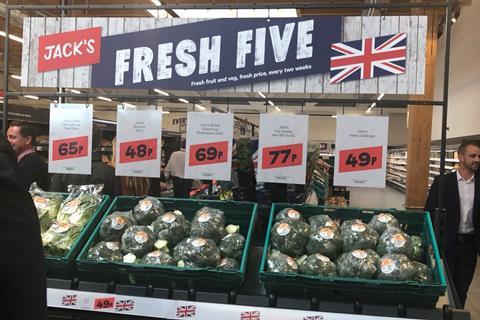 Eight out of 10 products in Jack’s will be British-grown, reared or made

Analysts have speculated that the brand could expand to around 60 stores in the foreseeable future.

It will stock own-brand Jack’s produce as well as what Tesco termed “familiar” grocery brands and, in a move copying the likes of Aldi and Lidl, general merchandise on a ‘when it’s gone, it’s gone’ basis. Eight out of 10 products will be British-grown, reared or made.

Tesco is understood to have drafted in former Aldi executive Lawrence Harvey and advisers from Boston Consulting Group to help draw up its plans.

“It’s fitting that today, we mark the beginning of Tesco’s celebration of 100 Years of Great Value by launching a new brand, and stores bearing his name: Jack’s.”