Tesco-owned garden centre chain Dobbies has slumped to a full-year pre-tax loss of £48.4m after writing down the value of its portfolio. 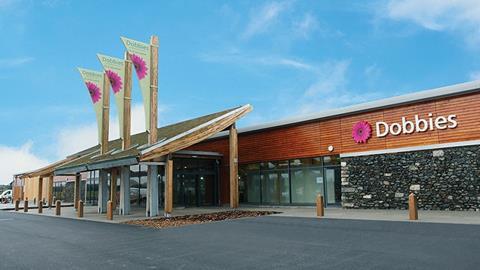 The business reported an 8% uplift in sales to £153m during the 53 weeks ending March 1, but plummeted into the red after a £54.4m property write down.

Dobbies, which made a pre-tax profit of £6.6m the previous year, said profits were down 9% to £6m excluding the impairments on its assets.

It comes just a week after other non-core businesses in Tesco’s portfolio reported losses. Restaurant chain Giraffe, which was acquired by former boss Philip Clarke, revealed full-year losses of £4.1m after investing in opening stores and writing down the value of some older sites.

Tesco’s convenience store chain One Stop said its profits had halved to £10.2m in the 53 weeks to February 28 as it invested in setting up a franchise operation, while its Harris + Hoole coffee shop chain reported a widening in its losses to £25.6m during the year.

Dunnhumby, the data business behind Tesco’s Clubcard loyalty scheme, was in the black but reported a 9% slide in profits.

Boss Dave Lewis had been attempting to sell Dunnhumby but shelved those plans in October after failing to receive high enough bids for the business.

Lewis said he would “never sell an asset below what it is worth” as he called an end to the reshaping of the grocer’s non-core business portfolio.

Tesco offloaded its Korean Homeplus business for £4.2bn in September and has also sold Tesco Broadband, its entertainment streaming service Blinkbox and a fleet of private jets as Lewis bids to protect and strengthen the grocer’s balance sheet.

Some analysts had suggested that several other non-core businesses, including Dobbies, should be sold to further aid that pillar of his strategy.

A Dobbies spokesman said: “We are pleased with our full-year trading performance in 2014-15. This demonstrates that our strategy of putting plants and gardening first is working.

“Our strategy remains focused on our core categories of plants and gardening, which we are confident will fuel our growth in the future.”

Quinton Edwards registered business valuer Simon Quinton Smith said: “The industry has felt for some time that Dobbies’ policy of building new on green field sites was not working.

“It is believed that the costs of some of their stores to include the land, infrastructure, buildings and fit out were between £8-10m, and unless the stores generated turnovers of a similar amount, there was very likely going to be losses generated.