Sainsbury’s outperformed its big four grocery rivals again during the Christmas trading period as sales advanced 0.8%, according to Kantar data. 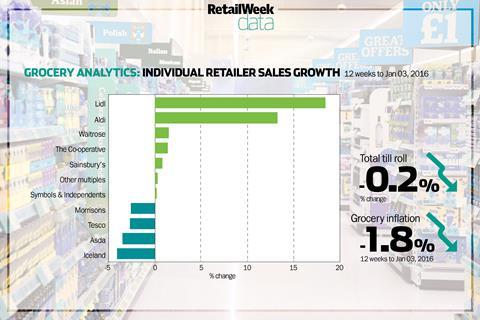 The supermarket giant’s premium Taste the Difference range helped it attract 114,000 new shoppers during the 12 weeks to January 3, as consumers traded up during the festive season. That helped its market share edge up to 17% from 16.9% in the same period in the previous year.

It comes 24 hours before Sainsbury’s unveils its Christmas trading performance, with Tesco set to follow on Thursday. Morrisons revealed a 0.2% increase in Christmas like-for-like sales earlier this morning.

The Co-op also won share at Christmas for the first time since it acquired Somerfield. The mutual enjoyed sales growth of 1.4%, helping its market share edge up to 6% from 5.9% in the previous year.

Market leader Tesco suffered a 2.7% drop in sales, although an investment in its ‘festive five’ fruit and vegetables promotion helped slow the embattled grocer’s sales decline. It is an improvement on the 3.4% decline recorded in the 12 weeks to December 6.

Asda’s sales plunged 3.5% during the period meaning it was again the worst performer among the big four, while Morrisons recorded a 2.6% decrease. That left their market shares at 16.2% and 11% respectively.

Kantar data revealed that Lidl was the fastest growing grocer during the crucial Christmas trading period, as sales advanced 18.5%. Discount rival Aldi recorded a 13.3% uplift. Aldi said this morning that it delivered its best ever trading day on December 23.

At the other end of the price spectrum, upmarket grocer Waitrose benefitted from the trend of shoppers trading up at Christmas as sales increased 1.5%, helping its market share grow from 5.1% to to 5.2% on the previous year.

Fraser McKevitt, head of retail and consumer insight at Kantar Worldpanel, said: “Shoppers reaped the benefit of falling prices this Christmas, with groceries 1.8% cheaper than last year. The amount spent on a typical Christmas dinner fell even faster – down by 2.2% – mainly due to cheaper poultry and traditional vegetable trimmings.

“Alcohol sales increased thanks to a surge in popularity for sparkling wines including champagne and prosecco, which increased in value by 11%.

“Wednesday December 23 was the single biggest shopping day of the year, but the anticipated uplift from an extra day in the week before Christmas didn’t help the supermarkets overall. Consumers simply delayed their shopping trips later this year, rather than making any extra trips.”

Kantar’s findings were backed up by separate data from Nielsen, which revealed that Sainsbury’s was the only member of the big four to grow sales during the final 12 weeks of 2015, having recorded a 0.2% increase.

Asda was again the hardest hit, as sales plunged 4.2%, while Tesco and Morrisons suffered 2% and 2.7% declines respectively.

The Co-op and Waitrose also enjoyed sales gains of 1% and 1.5% respectively.